The SATIB Trust is a non-profit/charitable organization (NPO)  which raises  donor funding from local and international organizations for the benefit of the conservation, environmental and community projects in Africa.

SATIB Trust is committed to pursuing and protecting our environment – See more at: http://www.satib.co.za/SATIB_Trust

One of the projects that we support is Elephants Alive in collaboration with Save the Elephants.

I travelled with Brian Courtenay (Chairman of the SATIB Trust) to meet with Michelle Henley, Kate Evans and Ivo Lazic (The Chairman of the APNR) to discuss shared objectives and to get an overview of the security situation and the Umbabat Anti Poaching Unit.

We were fortunate to locate an Elephant matriarch by the name of Dini who was collared some years ago. I have know this elephant cow on Ntsiri for at least ten years as she is easily identifiable as a result of her right tusk pointing sharply upwards whilst the left tusk points down.

Dini goes through definite mood changes (this may be a female thing?), when I first met her our meeting came close to resulting in her re-modelling of the landrover. In December 2012, many years later and after many other interactions, she led her herd which now numbers around 40 elephant, around us. She had very small calves in the herd and was very relaxed. On this particular exercise one of the objectives was to locate Dini who we found, much to our surprise, feeding with another large breeding herd on the north bank of the Ntsiri River – they were all very relaxed.

It was evident from viewing her that the collar is about to come off and the team need to make a decision about what to do about this.

Michelle’s work currently involves the monitoring of 20 collared elephants in the APNR and another 9 individuals in the Pafuri region of the KNP. We were fascinated to learn that the larger bulls travel from the APNR all the way up to as far north as Shingwedzi and back again during their musth cycles.

The movement of these bulls is plotted through satellite tracking that Michelle monitors on a regular basis.

To find out more about the work look at save the elephants Elephants Alive, in collaboration with Save the Elephants, is a research and conservation-based organisation that looks closely at the impact of elephants on their habitats and represents a platform to create awareness of elephants and their survival at a time when populations are being decimated across Africa. 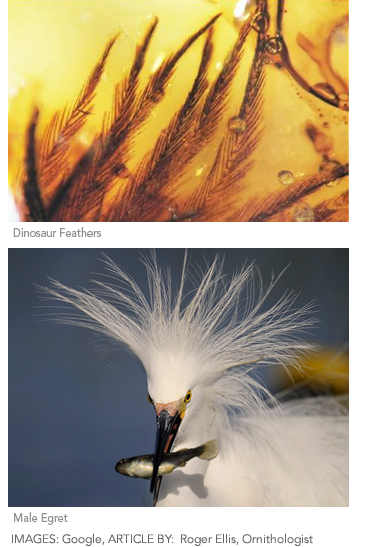 Approximately 80 million years ago a dinosaurs scale ruptured to allow for a furry covering that we have come to know as a feather.

This extremely versitile structure allows for a multitude of applications, the most important one being the art and science of flight. Other functions would include swimming, temperature control and defence.

The diversity of the feather structure dependant on the species as well as the position on the birds body, have led to some strange and sometimes traumatic behaviour by humans on their feathered friends.

In the 1940’s for example it became very fashionable for the European woman to adorn themselves with the head feathers of the Little Egret, Egretta Garzetta , this almost led to the extinction of this species.

Another example is the men of Guinea who adorn themselves with the feathers of birds of paradise, again causing massive stress to their populations.

On close inspection of this remarkable structure one can see an extremely strong centre spine down the middle of each feather, which allows for the support of the finer side filaments which have various hooking mechanisms to tie them together. This is extremely important especially in the high speed flight of some of our larger species of bird, for example birds of prey having to out manoeuvre and out fly other avian species.

They need extremely strong primary feathers which come out of the “hand” of the bird, these are normally the ten first feathers on the outer ends of the wing which give the birds their major thrust and steering control.