The Remarkable adaptive nature of Elephants 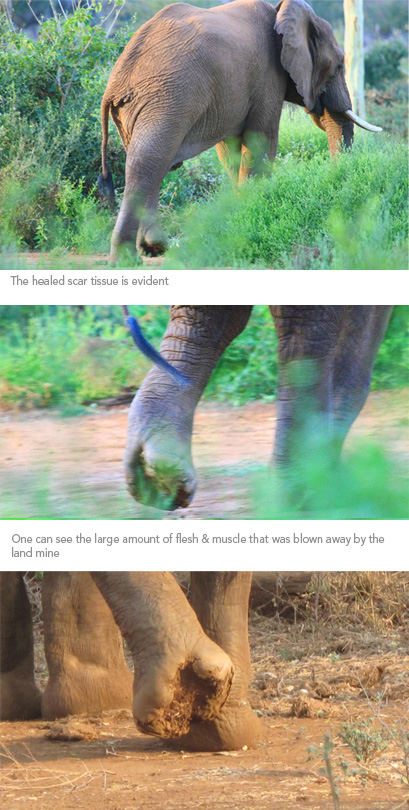 I have just spent a few days in the Pafuri Concession of the Kruger National Park in the Trails camp operated by Wilderness Safaris.

I spent a few years with Wilderness Safaris developing the spectacular camp that was washed away by the floods in January this year.

The concession is thriving with animals and in the flood plain in view of the camp there are hundreds of head of wildlife to be seen throughout the day.

The surprising increase is in the herds of Zebra which are plentiful and seen to be feeding amongst Nyala, Baboon, Vervet Monkey, Impala, Kudu and Wildebeest.

He was limping badly and on closer inspection it was apparent that he had detonated an anti personnel mine on his left rear foot.

Taking a closer look it seems that this injury is at least a year or two old which shows that the bull has adapted to living with this terrible injury.

It is surprising how it has avoided becoming infected straight after the incident and judging from the scar tissue has healed without any remaining open wound.

I spoke with Willem, a guide who has spent 6 years in the concession, and he has not seen this bull before.

There have been a few elephant that have entered from Zimbabwe & Mozambique with land mine injuries from this incredibly cowardly warfare of man.

Unfortunately these land mines lie there for years after the conflict has ended.

It just makes one realise what a remarkable adaptive nature these pachyderms have & how badly our species impacts on these forgiving animals.

Dr Michelle Henley of Elephants Alive has been monitoring some collared elephant in the Pafuri region for some time with the support of Wilderness Safaris. This is a study on the transboundary movement between the Parks in the Greater Limpopo Transfrontier Conservation Area.

Michelle sent me an image taken in September 2011 by one of the Wilderness guides, Enos Mngomezulu, of what we believe to be the same elephant. 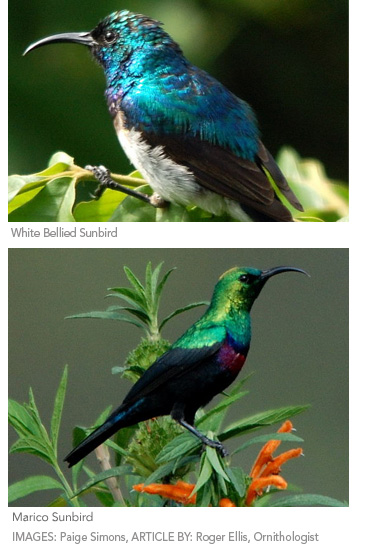 Sunbirds of the family Nectariniidae are a group of very striking small birds. They all have slender down-curved beaks which are an adaptation for harvesting nectar.

The Sunbird’s relationship with spiders is quite involved as both a food source and a home. They rely on spiders for the majority of their food and utilize spiderwebs to build compact and intricate nests which are often mixed with dead bark and leaves.

The adult males in this family mostly display extremely bright metallic blue or green feathers on their backs and dull grey-black or white belly feathers. They are fast moving agile birds and as a result of this are often quite difficult to identify.

In females it is often the beak length and curvature that are the best ways to distinguish one species from another.

Some of my fondest low-veld memories are of a Weeping Farmers Bean (Schotia Brachypetala) tree in full bloom where the dripping nectar attracts large quantities of these beautiful birds.

A good way of attracting sunbirds to your garden would be to plant indigenous flowering shrubs and aloes. Specialised bird feeders that imitate flowers can be filled with concentrated sugar water for the same effect.