Tracking Peter Anderson, CEO of Anderson Wildlife Properties, required as much perseverance as finding the big five, but he was covering far greater distances in a day than Africa’s most famous beasts. It’s two weeks before he’s finally available (first he was deep in the heart of Tanzania and then on a mission in the Greater Kruger, but that’s what this industry is about: being out there and hands on). Passionate about conservation, Peter has 25 years’ experience in the wildlife property and tourism industry within southern Africa, but is also a helicopter pilot and photographer.

He grew up in the Timbavati, and began his career by guiding safaris at Londolozi. In 1986 he cofounded Livingstones – initially, a safari-supply company – and by 1993 he’d opened the doors of Anderson Wildlife Properties (AWP), specialists in big-five protected game reserves and luxury wildlife properties. Since then AWP has converted, secured and extended over 300 000 hectares of wildlife property in southern Africa. Collective experience in wildlife, conservation and tourism that engages in sustainable public/private partnerships with local communities, wildlife areas and the private sector are the company’s strength. Peter’s experience includes:

• the eight-year development of Welgevonden Game Reserve in the Waterberg, together with Rand Merchant Bank;
• the seven-year Marakele Contractual Park Establishment Project, including the launch of the Sterkfontein Special Species Breeding Project;
• a seven-year appointment to the board of Utrechtse Beheer Maatschappij Catharijne BV (UBMC), a Dutch board managing the southern African interests of Dutch philanthropist and conservationist Paul Fentener van Vlissingen;
• a roan and white rhino exchange between SANParks and the Botswana Department of Wildlife. This successfully reintroduced 30 white rhino to Mombo, a Wilderness Safaris property in the Okavango Delta; and
• his appointment as managing director of Wilderness Safaris South Africa in 2003. During this time, he established the Makuleke Contractual Park Partnership and Pafuri Camp in the northern region of the Kruger National Park.

Today, he’s looking for 17 custodians to conserve the legacy of the Lapalala Wilderness project and to maintain the obligations of the Waterberg Biosphere.

Peter is working with like-minded philanthropists and conservationists to responsibly protect the legacy that was created by Dale Parker and Clive Walker to create a reserve where investors will own the right to build a lodge on a 1 500 hectare freehold site (from R20 million) within the 36 000 hectare big-five reserve. The entire project will be self-sustaining from an energy point of view, with a minimal footprint, responsible waste management and water harvesting.

Architect Nick Plewman (plewmanarchitects.co.za) has consulted on the project. Besides private residences and private lodges (Getty at Phinda, Makanyi in Timbavati and Toulon Lodge private residence in the Sabi Sands), he is best known for his work on &Beyond’s African Homestead at Phinda, and Xaranna camp and Xudum lodge in the Okavango Delta, as well as Marataba in Marakele National Park to name a few of his projects. But, more importantly, it will enable the original Wilderness School to thrive, and the property will have the first private rhino- and roan antelopebreeding initiative.

This aims to restock Lapalala and other parks and poached areas where species are under threat. ‘We have to win this war,’ says Peter, ‘and start breeding actively’. This model will create a revenue-generating and job-creating tourism model and a custodianship owner programme. The objective of all these activities is to make the conservation and protection of Lapalala sustainable, a challenge faced by many other wildlife regions in South Africa today. 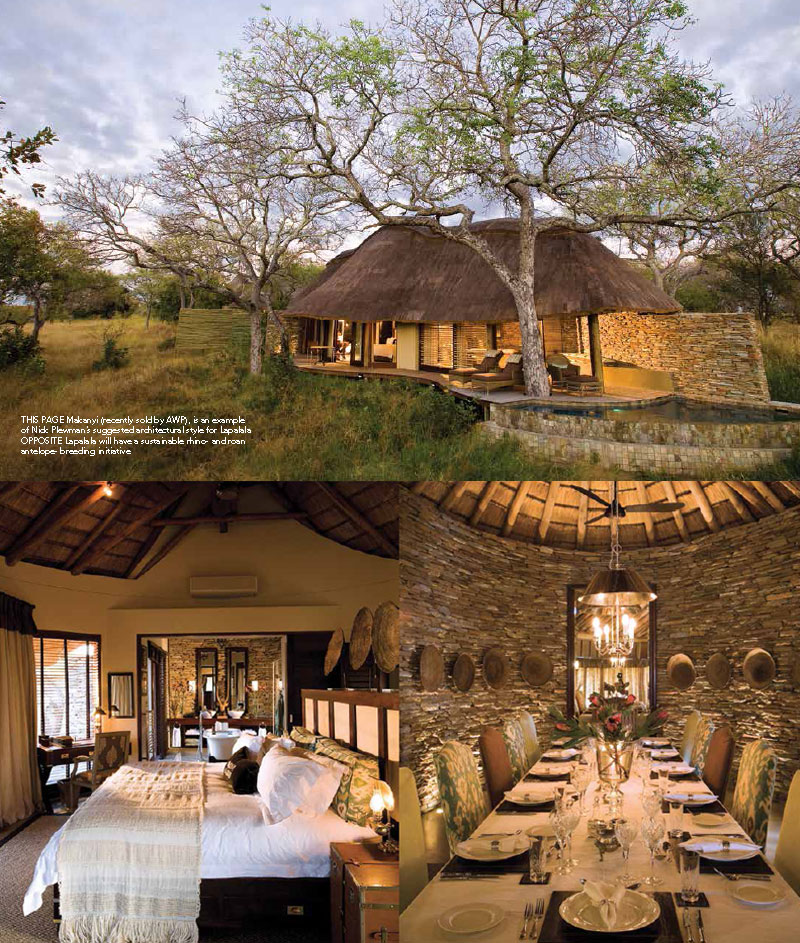 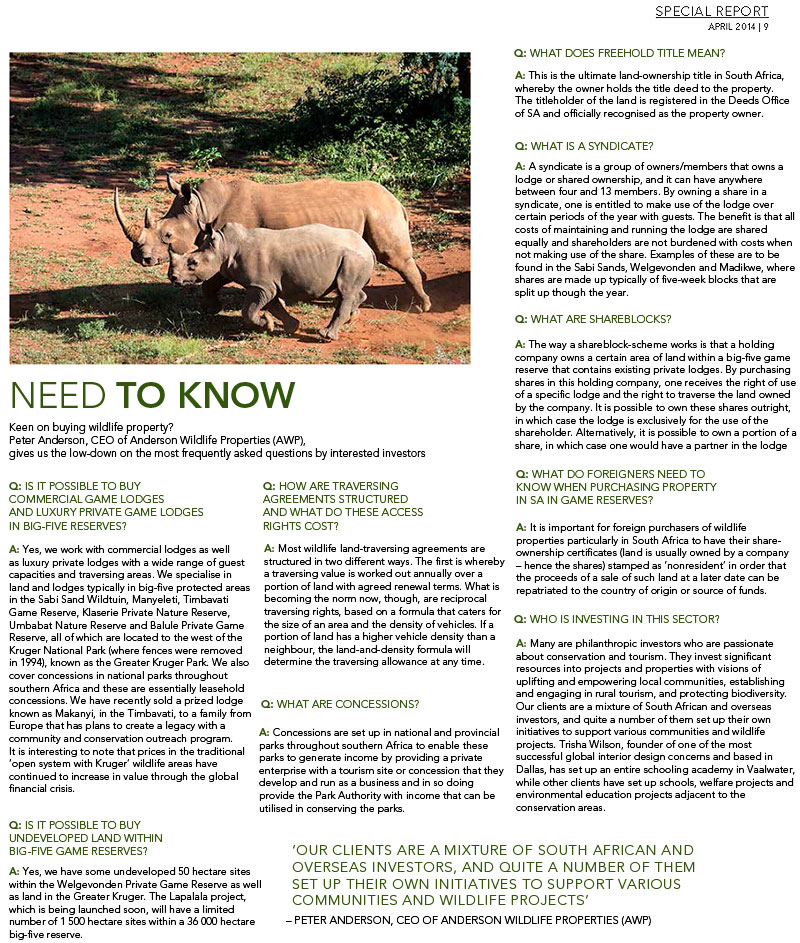 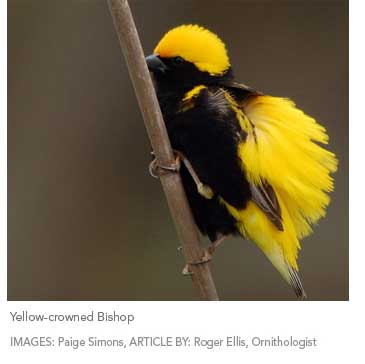 This striking little bird is part of the bishop and widow family.

During the breeding season the male adopts a distinctive bright yellow and black plumage which contrasts with the female’s brown coloration. These feathers are utilised in courtship displays and territorial defence.

When the bird is in flight the yellow feathers are held erect on the body making it look more like a giant bumble bee then a bird.

Males go through a radical moulting process twice a year which leaves them as little scruffy brown birds during winter and they are often over looked.

These birds are found in large flocks and breed in tight colonies with each male being polygamous courting several females consecutively.

They prefer habitats such as grasslands, vlei’s and reed beds across a large part of central southern Africa. The nests are constructed in reeds or weedy vegetation along wetlands and most of the breeding is done between the months of December and March.