The widely acclaimed Lapalala Wilderness project in the Limpopo Waterberg has developed its first off grid lodge within this 45,000 hectare conservation area. A tented camp has been designed around the site of a grand weeping boer-bean tree (Schotia) which looks out onto plains in the core of the reserve.

The 4 accommodation units are linked by raised wooden boardwalks which have been constructed with radiata plantation pine. The tents and the main lodge are all based on suspended wooden decks and the entire energy reticulation is through a solar energy system. Solar energy is converted through a panel system of photovoltaics to an inverter which in turn converts the energy into 8 KvA of 220volt power.

All of the lighting, appliances and electrical equipment have been sourced through an energy saving process to establish lowest utilistion of power through low wattage systems. The fridges and freezers are AAA appliances which use 100 watts each, as an example, and pathway lights use 1 watt globes. The swimming pool makes use of a low wattage pump and filtration system which is set to cycle for a limited time and thus reducing the energy demand.

Special care was taken in the construction of the main lodge to build the structure around a large tree. 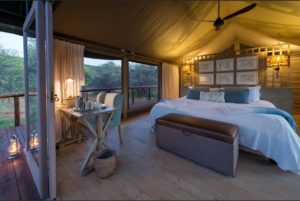 This was an”organic” design which evolved as work continued without any damage to the tree. The growth of habitat around the camp, after the first good rains, has now seen the camp being well disguised within the canopy of trees and shrubs on the site.

The tents are quite unusual in that they have been designed with  fireplaces for some of the colder winter months. The fireplaces will make use of wood that has been collected from the habitat enhancement project of bush clearing that has taken place on Lapalala. This project has supplied the wood resource that is set to provide the wood for a number of years.

Not only have the plants begun to grow around the camp but the animals have moved into the camp area.

Our country is experiencing one of the worst droughts in recorded history and causing strange patterns in wildlife movement, more noticibly in bird life. The Spotted Crake is a rare migrant from Eurasia. They migrate here for our summer but are rarely found this far south in Africa.

This particular individual in the photograph was found at a small artificial water feature close to a busy road at Waterfall Estate in the Northern part of Johannesburg. The Crake showed no fear of the high traffic volume and the many excited bird watchers on a nearby lawn. This bird now its first year was hatched in the previous European summer and obviously in a relatively densely populated area.

Usually Crakes are secretive and skulk around in marshy sedges adjacent to waterways. This bird was however not perturbed by the  many eager bird watchers photographing it as it patrolled the water line catching insects in the water.