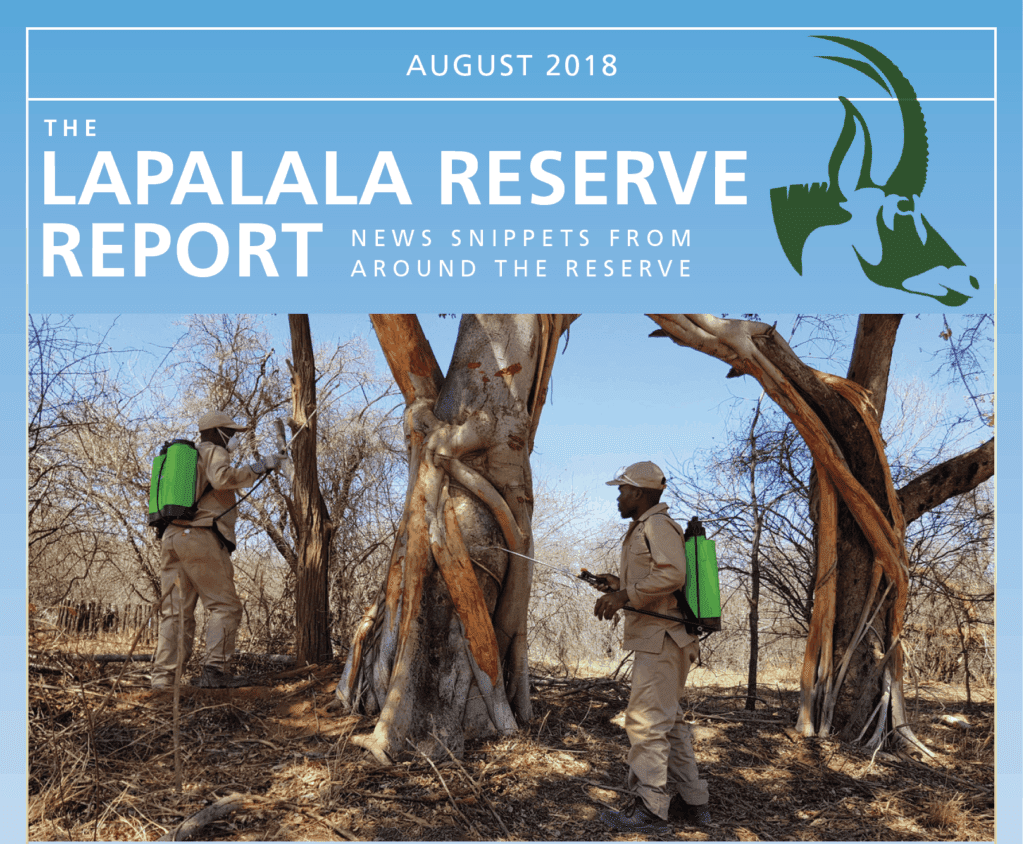 In a bid to protect trees from elephant damage, Lapalala has started spraying selected trees with organic neem oil, which is a natural deterrent to elephants. We carefully select mature, iconic and rare tree species as well as trees that play a particularly important role as a source of food, water and shelter. A good example is the eye-catching red-leaved fig tree (Ficus ingens), of which a number of individuals are showing signs of elephant impact. Our goal is to prevent further damage to these trees and we hope that, by using this method, the beauty of these majestic trees can still be enjoyed long into the future. 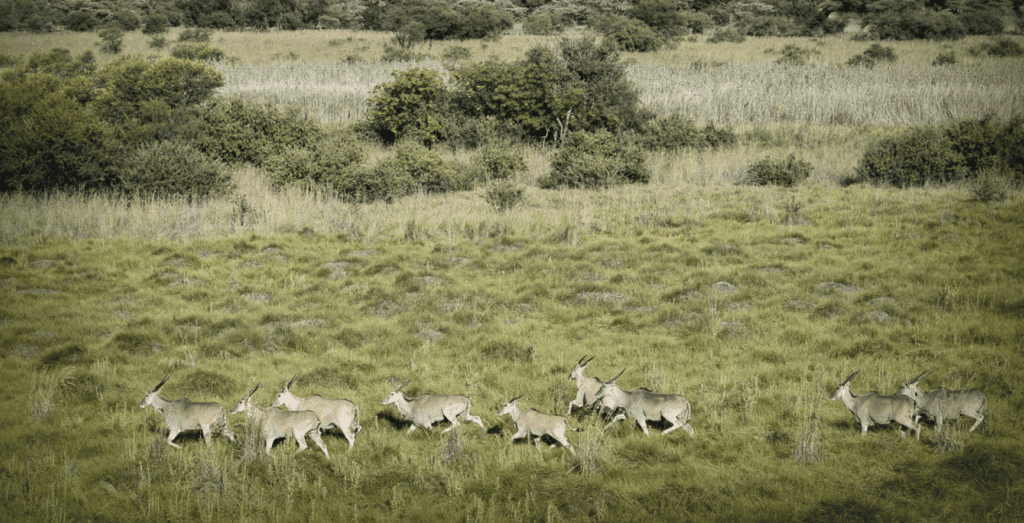 The annual game census for 2018 was conducted from 9–15 August. A drop in numbers of certain species was anxiously anticipated due to the relatively dry conditions of the past rainy season. The end results, however, ended up better than expected. Although we saw a slight decrease in the populations of certain species, other species such as wildebeest, zebra and giraffe showed healthy growth over the past year. 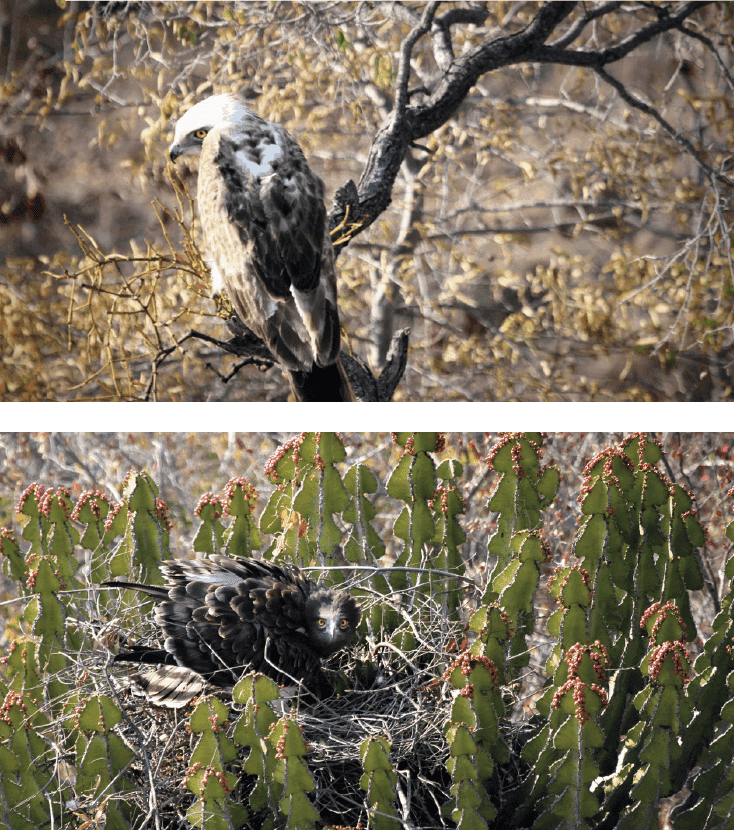 This juvenile black-chested snake eagle (Circaetus pectoralis) was spotted during the annual game census in the Wilderness area, calmly posing for the counting team while the helicopter circled around him. Helicopters can fly low and slow enough to allow for exciting bird of prey photography.

Another unexpected observation while counting in the Wilderness area was this black-chested snake eagle perched on its nest. This pair chose an interesting location to breed, as one does not often see a bird of prey nesting in a euphorbia – or are we just completely overlooking them from the ground? 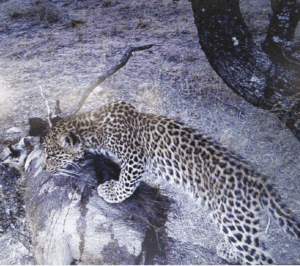 The Tintswalo team has initiated a promising new project with the aim of getting our leopards more habituated to the presence and sounds of vehicles and tourists. The first objective will be to attract leopards to certain areas by creating bait sites where leopards can come to feed. Once the leopards feel safe enough to feed at the sites, the next step will be to slowly allow vehicles to approach the leopards and to create an environment where the leopards feel comfortable around vehicles. A camera, placed at every bait site, will capture which individuals visit the bait. One of our first visitors was this female leopard with her cub. 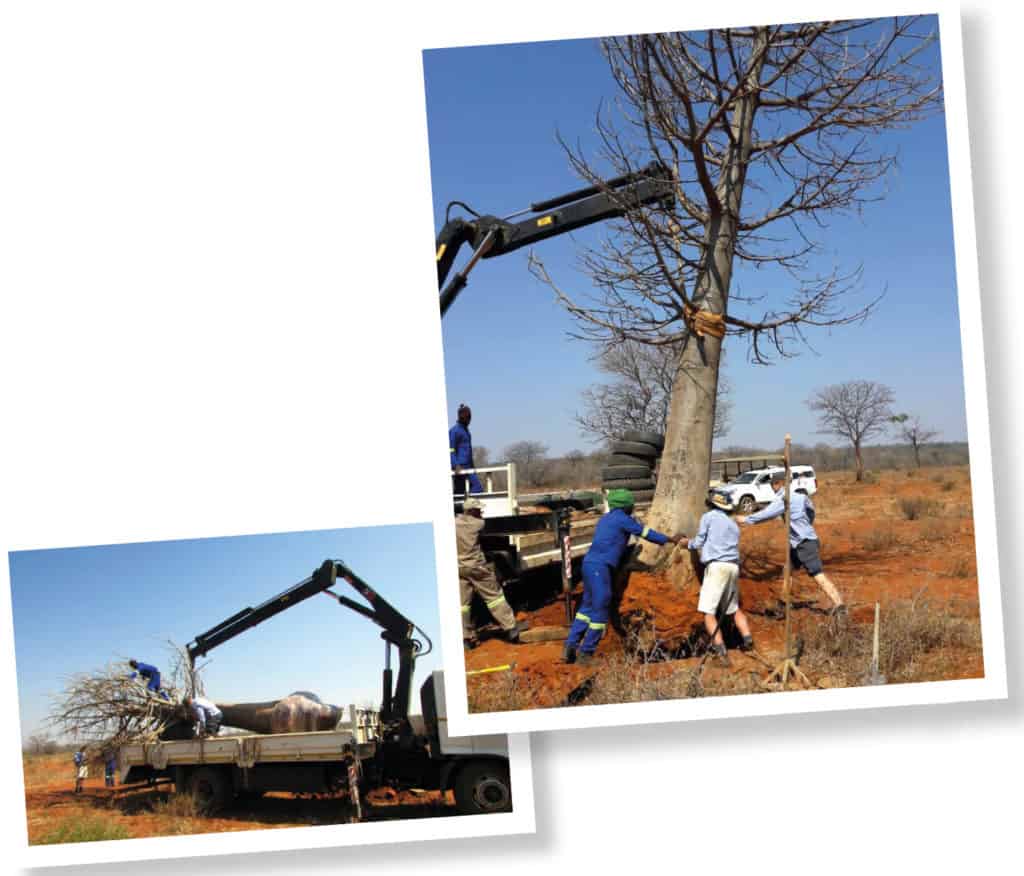 A TREE WITH A STORY

A large baobab tree has been successfully translocated to Lapalala Wilderness from a community village in Limpopo. The translocation was an initiative set in motion by our soon-to-open commercial lodge, Lepogo Lodge. The move will dramatically improve the habitat and growth prospects of the tree.

Moving a baobab tree is a challenging exercise, especially due to its weight. A huge sigh of relief resonated across the reserve when its roots were safely in the ground of its new home at the Lepogo Lodge amphitheatre site.

This month, Lapalala hosted a two-day training course for all our field staff members who work with equipment such as chainsaws and brush cutters. The training course was arranged and presented by staff from Livingstones Garden and Home, and equipped our employees with the information and knowledge they require for the safe and proper use and maintenance of the different types of machines. The course also included practical presentations in the field, which is sure to enhance the efficiency and safety of our field teams. 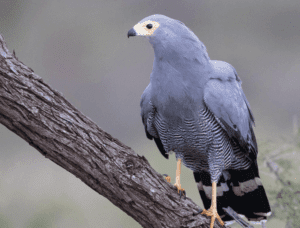 THE CLOWN OF THE RAPTORS

The African harrier-hawk or gymnogene (Polyboroides typus) is an impressive, medium-sized bird of prey that can be seen in Lapalala throughout the year. The upperpart, head and chest are grey and the belly is finely barred black and white. This distinctive bird is often seen hanging upside down from a branch, flapping its wings and sticking its legs or head into little holes. It has a double-jointed knee that enables its legs to bend forwards and backwards. The ability to climb and manoeuvre enables this bird to raid the nesting holes of birds like barbets and wood hoopoes for fledglings. 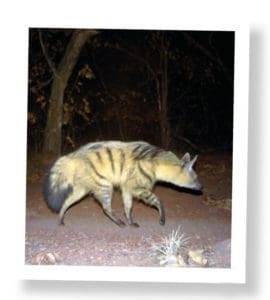 For logistical reasons, Lapalala performed this years annual camera-trap survey in the winter months. We were interested to observe that we frequently captured the aardwolf (Proteles cristatus) on this survey, while we never saw this species during previous surveys in summer. A factor that might be influencing the occurrence of this secretive, solitary forager on our winter pictures is the difference in food availability between seasons. The aardwolf is one of the four remaining hyenas in Africa, and the smallest too, with a shoulder height of 45-50 cm. Its main diet consists of termites. An interesting fact is that one of its favourite species of termite (Hodotermes mossambicus) has a seasonal activity pattern, differing between summer and winter, which may very well be the reason why we are being treated to remarkable aardwolf pictures this year.