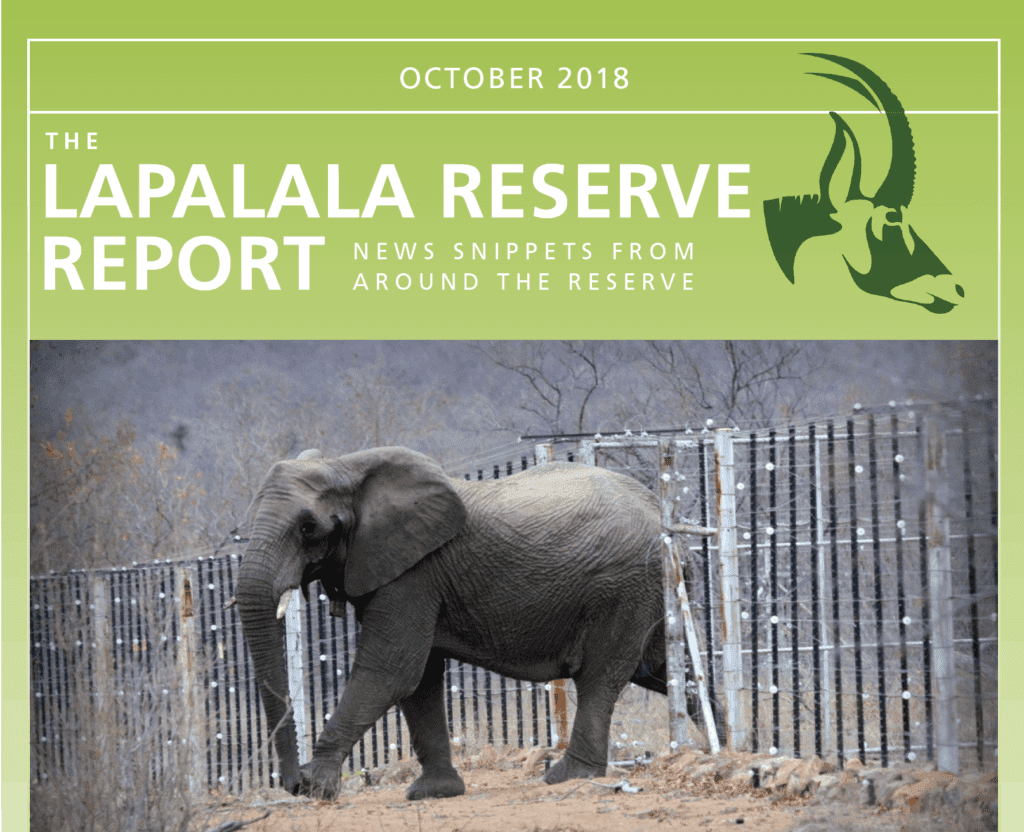 Our third elephant herd has arrived from Makalali Game Reserve and it was a touching moment to see the group of three females, a young bull and a female calf walking out of our elephant boma and into Lapalala’s pristine wilderness. The herd is a wonderful addition to our elephant population and has been spoiling us with frequent sightings in the southwest of the reserve, feeding and drinking right next to the vehicles without being disturbed by our presence. The entire Lapalala elephant population currently consists of 25 individuals. We plan to welcome an additional two, large, adult bulls in the next two months.

In preparation for the official Tour de Lapalala 2019 bicycle event, Lapalala Wilderness and Tintswalo lodge organised a 3-day trial run for a group of selected, experienced cyclists this month. It is envisaged that the event will become an annual bicycle race through the mountains, valleys and rivers of Lapalala – covering a large part of the reserve and allowing for a good, close-up view of the ecology of the area. The tour was a great success, covering a total of about 176 km and allowing for some very special animal sightings (including elephant, buffalo, a black rhino female with calf, countless white rhino encounters, large herds of general game including eland as well as some roan antelope on the last day). The tour also included activities like birdwatching and visits to places of interest, such as Bushman’s paintings, Kings Pool and the Lapalala Wilderness School. After a full day out, participants returned to Tintswalo lodge to relax, enjoy dinner and take in the night sounds of Africa. 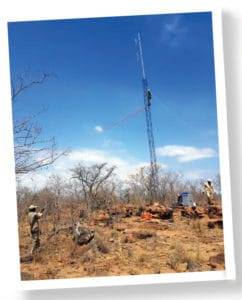 Lapalala has implemented a new digital radio system as our main communication platform between reserve, security, lodges and surrounding emergency channels. The digital system differs from our traditional analogue radios by allowing for a wider coverage, better sound quality, improved privacy and security, and more channels to work with. For the system to work, two new radio towers with new digital repeaters have been built in Lapalala, one in the southwest and one in the north. 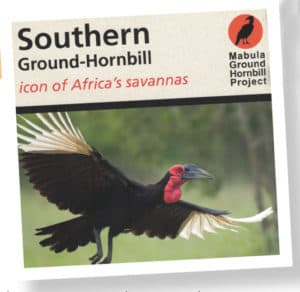 Lucy Kemp, project manager of the Mabula Ground Hornbill Project, visited Lapalala to discuss the potential of Lapalala being one of the project’s official release sites. The project has been trialing the hand-rearing and re-wilding of the impressive southern ground hornbill (Bucorvus leadbeateri), and has made excellent progress since its launch in 1999. The species is threatened with extinction and, due to their extremely slow rate of reproduction (each group of 3-12 individuals only rears one chick every few years), the successful conservation of this species is challenging. It also has very specific requirements when it comes to habitat. We were excited when Lucy confirmed that the recently cleared areas in the east of the reserve provide suitable habitat, making Lapalala a

realistic option as a release site. The next step is to wait for the availability of successfully reared birds that are ready for release. In the meantime, we will focus on creating awareness in the communities surrounding Lapalala as, unfortunately, one of the greatest threats to ground hornbills is accidental poisoning by farmers.

Another impressive summer visitor has returned from his winter break in the northern hemisphere. The steppe buzzard (Buteo vulpinus) is one of the most common predator birds in Lapalala during the summer months. This bird migrates over extremely large distances. Its breeding grounds extend from Eastern Europe to Siberia, and some fly as far as India. You can expect to see the steppe buzzard in Lapalala until February/March. Each one of them will look slightly different as their plumage shows great colour variation, in degrees of white, brown and grey. 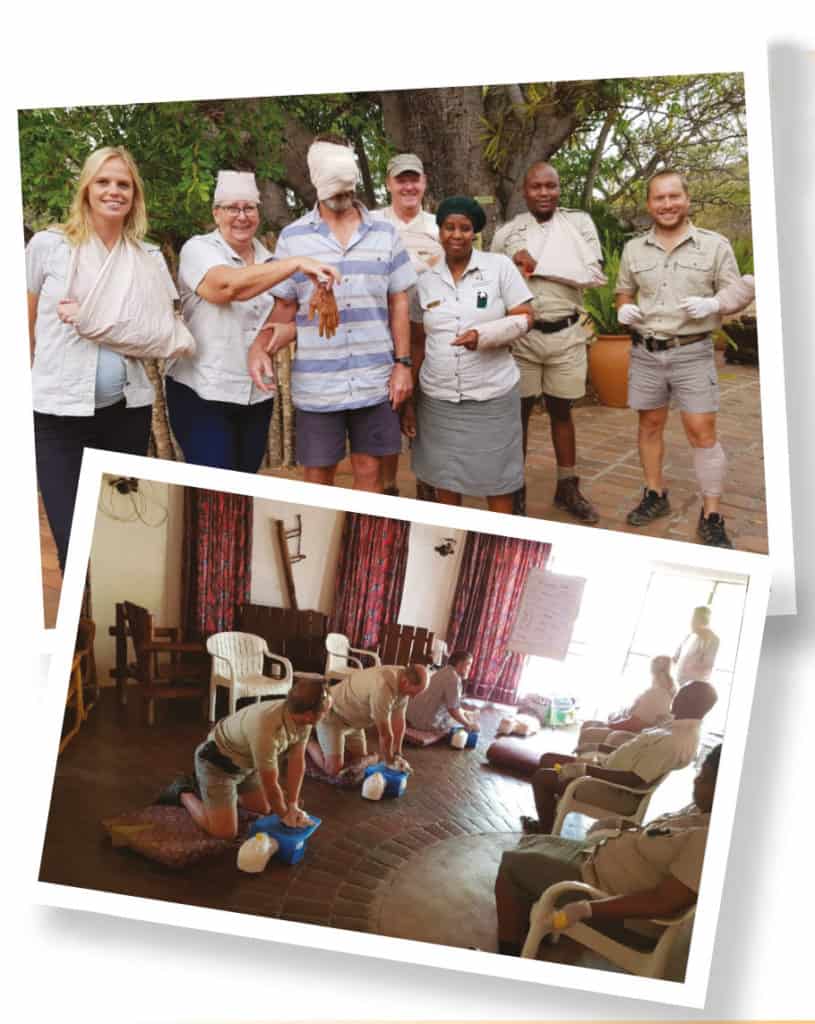 The Lapalala management team completed level 1, 2 & 3 first aid training this month with S.M.A.R.T. Solution. Learning basic life support techniques is an essential skill, enabling our staff to deal with sudden emergency situations in the remoteness of our reserve. After a couple of dynamic, fun and interactive days, our reserve management is now equipped with the relevant knowledge and skills to perform CPR and treat injuries until professional help arrives. The rest of our staff will complete level 1 & 2 training early next year. 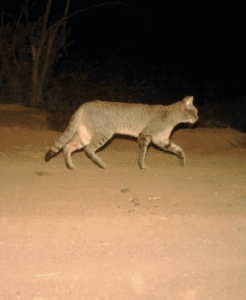 The African wildcat (Felis lybica cafra) – caught here on one of our camera traps – is a well-adapted, small predator that is seldom seen and yet prevalent in much of sub-Saharan Africa. The wild felid looks a lot like our domestic cat (Felis catus) , to which it is directly related. The African wildcat and domestic cat are even able to mate successfully, due to their close genetic makeup. Urbanisation and habitat loss have increased the chances of this so called hybridisation to happen, and have created a realistic threat to the genetic integrity of the species. African wildcats have longer legs and don’t have any white markings on their coat, but the only way to be certain that you are looking at a true African wildcat is to take a DNA sample. 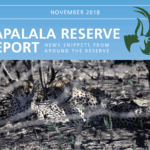 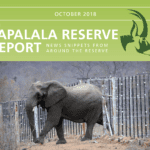 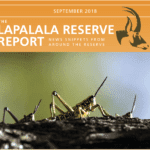