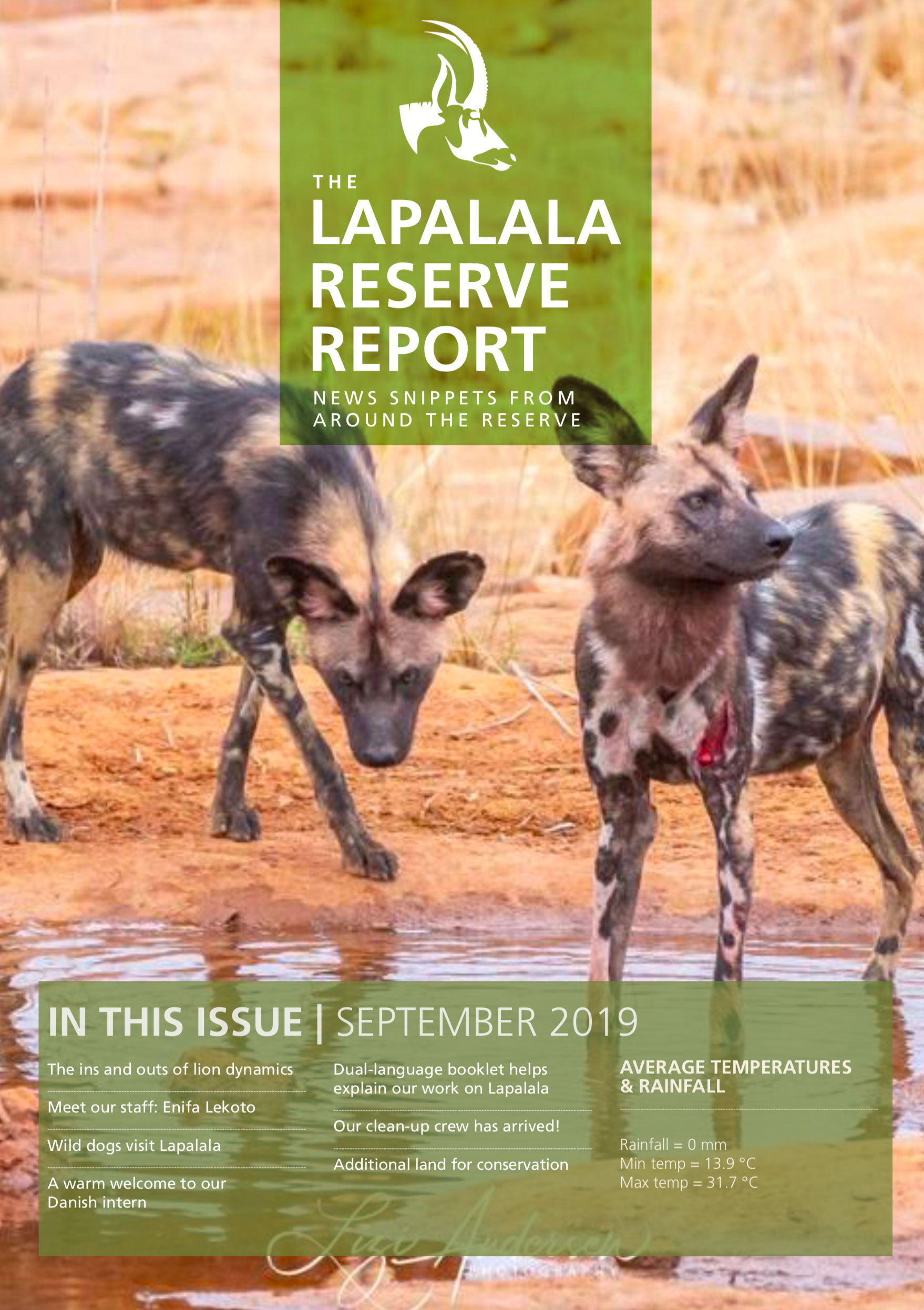 Our second (and final) pride of reintroduced lions was released from the boma onto the reserve. Although the lions – one male and three females – are all slightly younger than our resident pride, they quickly made their presence felt. There was much commotion on the reserve in the days following their release, while the nights were punctuated by the regular roar of lions.

A few weeks later we found the large male of our first pride reclining under a tree, surrounded by the three newly introduced females. It is not uncommon for male lions to chase younger males out of their pride, and the larger male is likely to move between the two groups of lionesses for some time.

Our ‘defeated’ youngster has subsequently been spotted alone, remaining on the western section of the reserve. The life of a young male lion can be tough, but it is all part of growing up. As our young male matures in strength and confidence there is the possibility that he will, in turn, challenge his rival in the future. 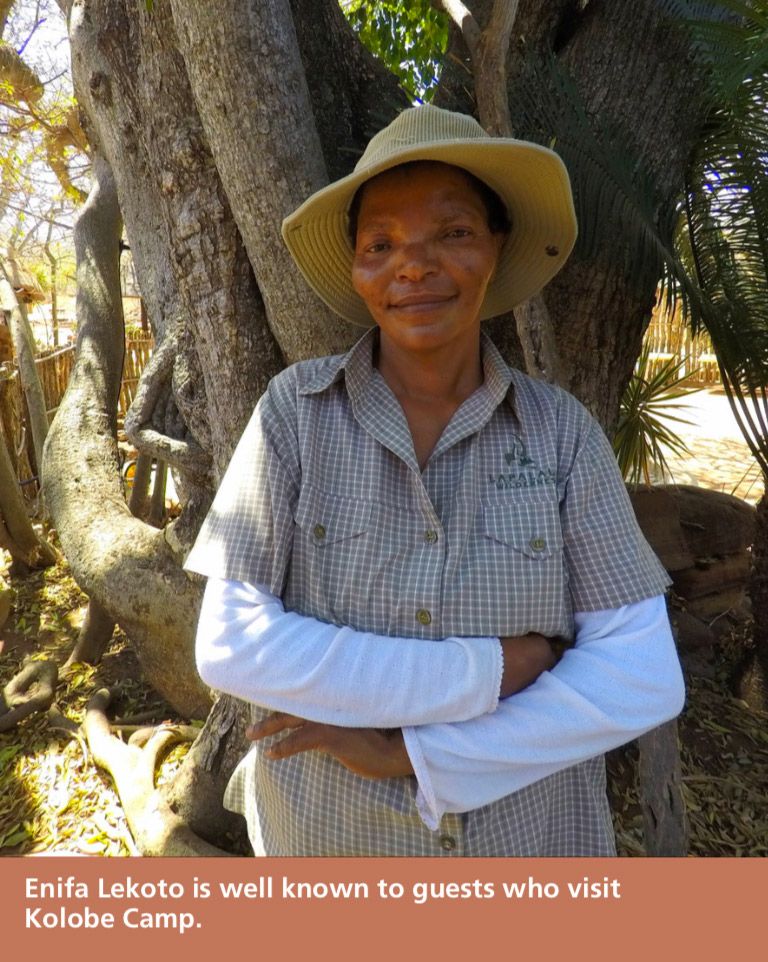 Enifa has been a member of the housekeeping team at Kolobe since 1996 and has been employed by Lapalala since its incorporation of Rundgrens in 1984.

According to Enifa, not much has changed at the comfortable, quaint Kolobe Camp since she first started working there. She has had some remarkable game sightings in her time. Rhinos frequently visited the camp, and she even saw a leopard once. The most noticeable change was when the lion-proof fence recently went up around the camp!

The free-roaming, Waterberg wild dog pack was spotted on the reserve during September, much to the delight of guests from Tintswalo at Lapalala.

Free-roaming wild dogs are masters at ‘breaking and entering’. They may test a fence for days until they find a weak point and slip through or underneath it, often via a river crossing or drainage line. On 15 September, our predator researchers spotted four wild dogs along Lapalala’s south-eastern boundary fence. One dog had already crossed the fence and was inside the reserve. A few days later, the Tintswalo team saw the entire pack during a game drive with guests. It is always exciting when the Waterberg wild dog pack spends a bit of time on Lapalala.

Lapalala has published a booklet to illustrate the work we do on the reserve. The dual-language booklet features text in English and Sepedi, along with illustrations that clearly explain the text. It is designed to help our staff and neighbouring communities understand the values, mission and objectives of our work on Lapalala.

Sepedi (or Pedi) is the local language spoken by people living in the Waterberg. It is a dialect of Northern Sotho, which is one of the 11 official languages of South Africa. 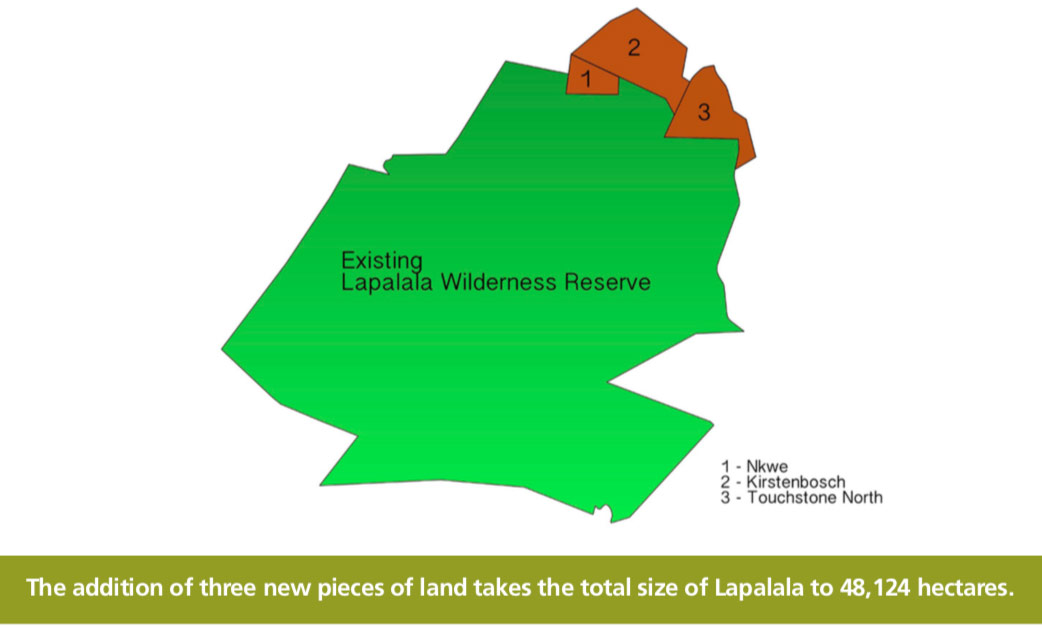 Lapalala has recently acquired three new pieces of land in the northern section of the reserve. All three areas – Nkwe, Kirstenbosch and Touchstone North – are important conservation areas, containing unspoilt wilderness that adds great value to the reserve. The land will be incorporated into the existing reserve in due time. 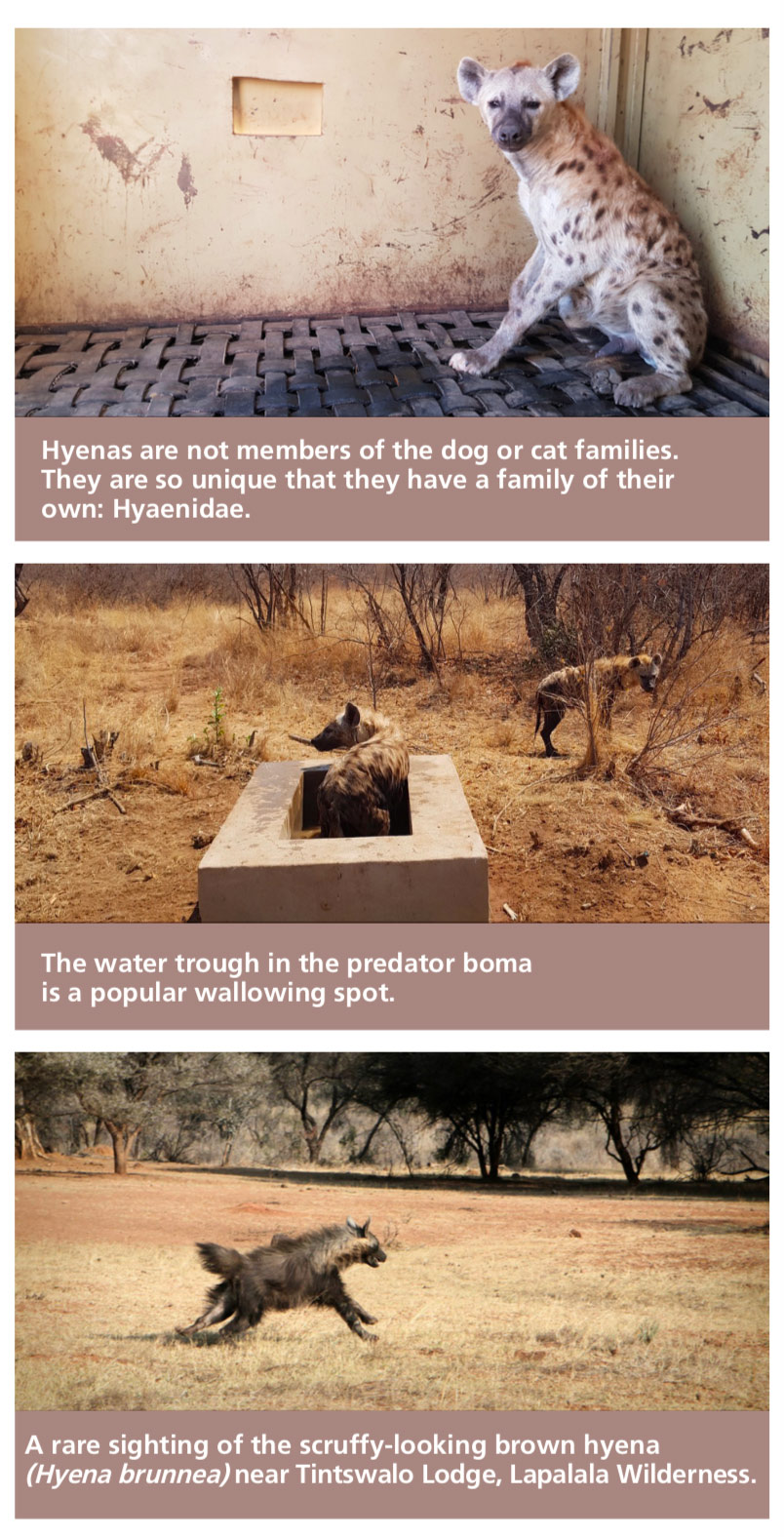 There was much excitement at Lapalala this month as our first clan of eight spotted hyena arrived on the reserve. The animals were captured in the Lowveld and translocated to the Waterberg where they are currently being held in our predator bomas. We expect to release the clan onto the reserve in mid-November.

Although spotted hyena (Crocuta crocuta)
occur naturally in the Waterberg, no resident individuals have been recorded on Lapalala
(with certainty) until now. Their large heads and strong jaws can crush most bones, so they play an important role in cleaning up the ‘leftovers’ after predators have finished feeding on a carcass. In this way, spotted hyena keep the ecosystem free from the decomposing remains of animals, both carrion and those that die naturally. Although they have a fearsome reputation as scavengers, spotted hyena are actually skilled hunters and able to take down large prey, such as wildebeest and zebra.

The spotted hyena will not be the first of the hyena family to reside on Lapalala. The reserve
is well known for sightings of brown hyena –
the smaller cousin of the spotted hyena. Lapalala Wilderness sustains a healthy, naturally-occurring population of secretive brown hyena. Fresh tracks are seen throughout the reserve, especially after the first rains have arrived. This scruffy-looking scavenger is most often seen on a night drive, when it can appear (and disappear) in a flash. Unlike the spotted hyena, the brown hyena

hunts only occasionally when presented with an opportunity to snatch an easy meal.