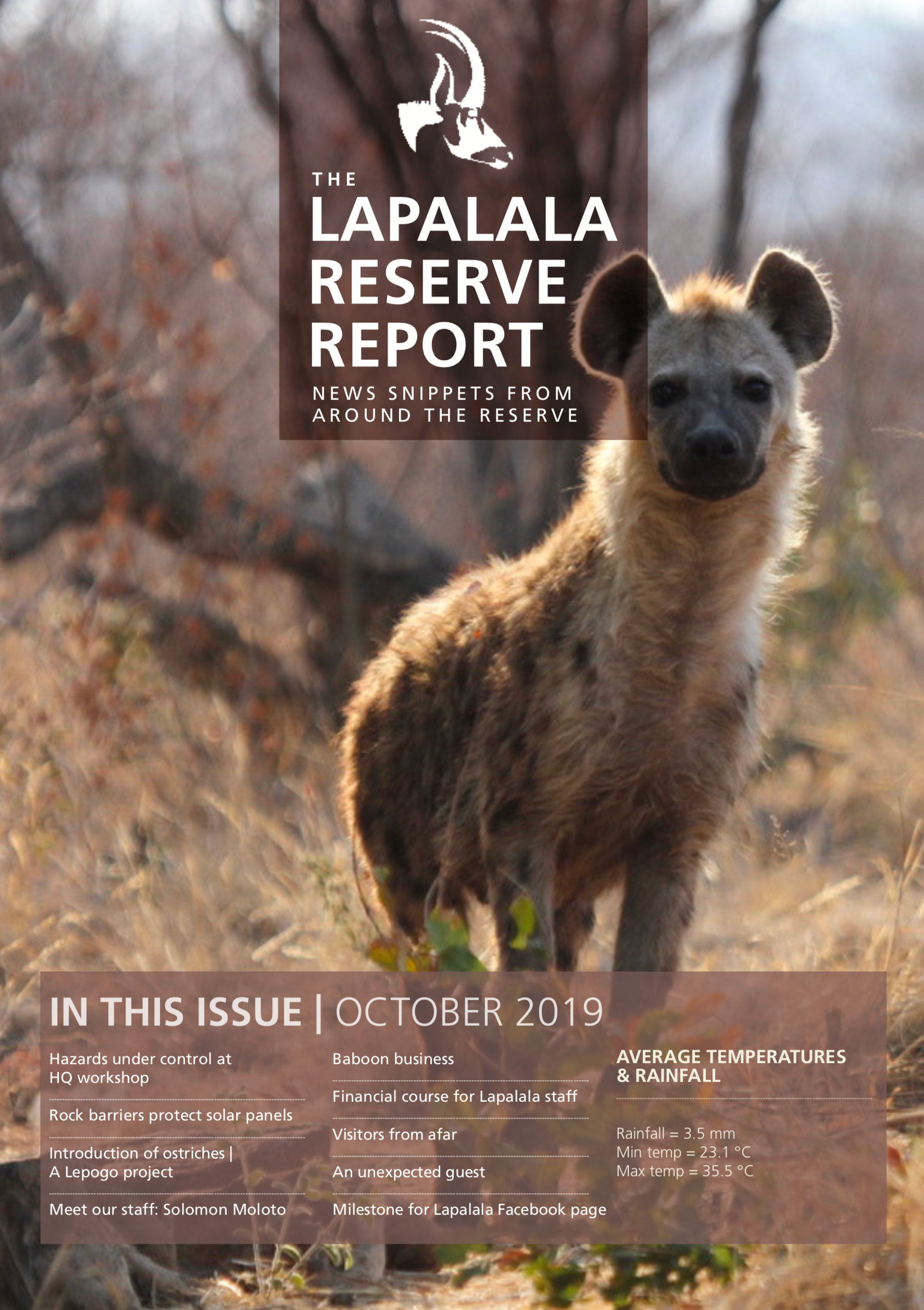 Lapalala is currently refurbishing the maintenance workshop adjacent to the headquarters’ offices. One of
the improvements is a professionally built gas stall. Compressed gas cylinders contain gas under significant pressure, presenting a potentially serious hazard in the workplace. The new cage safely secures our gas bottles in a well-ventilated area that is protected from sunlight.

Our inquisitive elephants pose a risk to our valuable solar panels, so we have installed concrete rock barriers to protect the panels from any ‘unwanted’ attention. Elephants seem to avoid barriers with uneven or sharp surfaces. The barriers are an effective, low-cost method of deterring the elephants from getting too close to the panels. 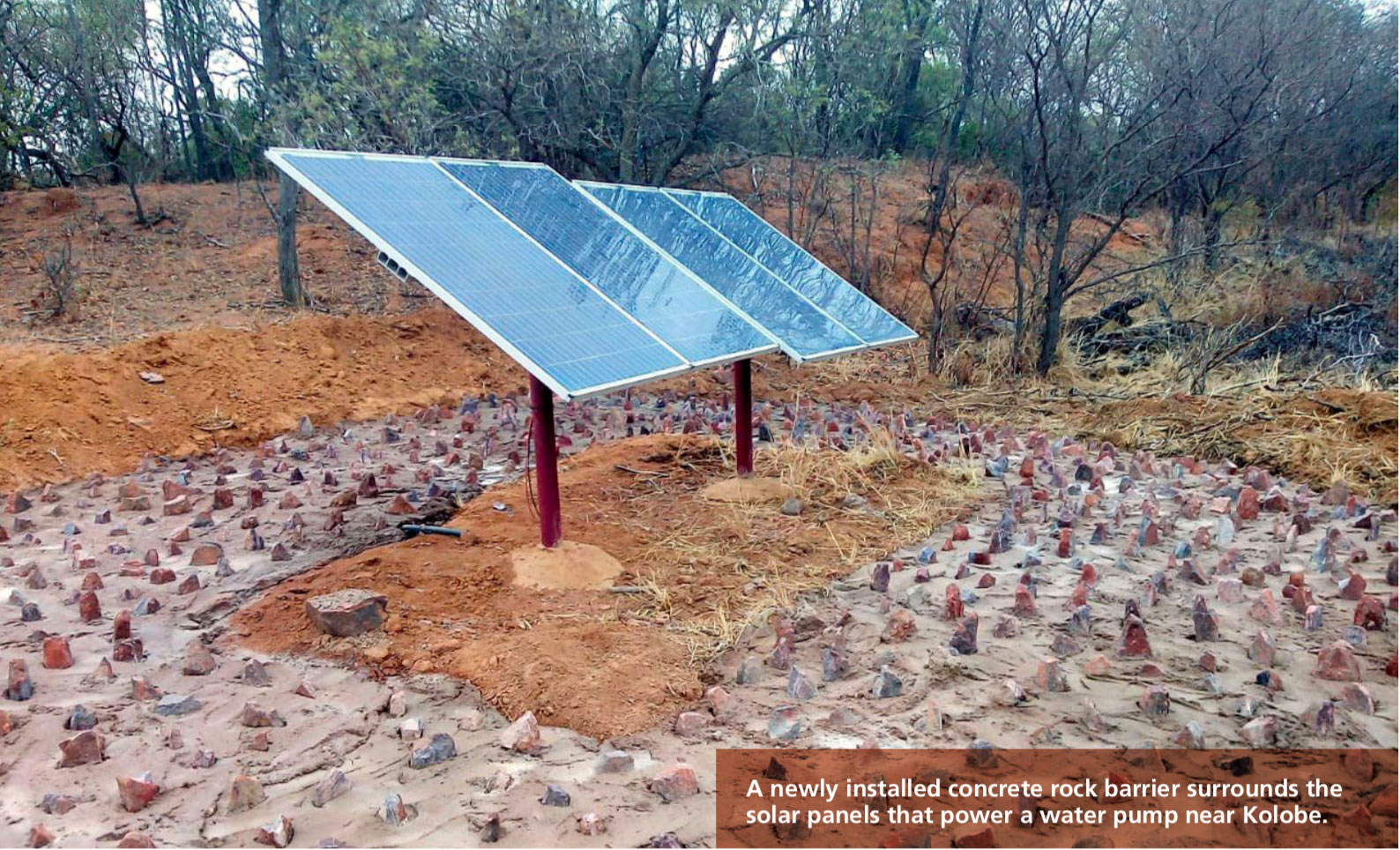 Lapalala is now home to 33 wild ostriches that were released onto the reserve on 17 October. The project to introduce wild ostriches to roam freely on Lapalala Wilderness is an initiative of Lepogo Lodges, the company that runs Lapalala’s luxury Noka Camp. We look forward to watching these iconic birds adapt and thrive on the reserve. 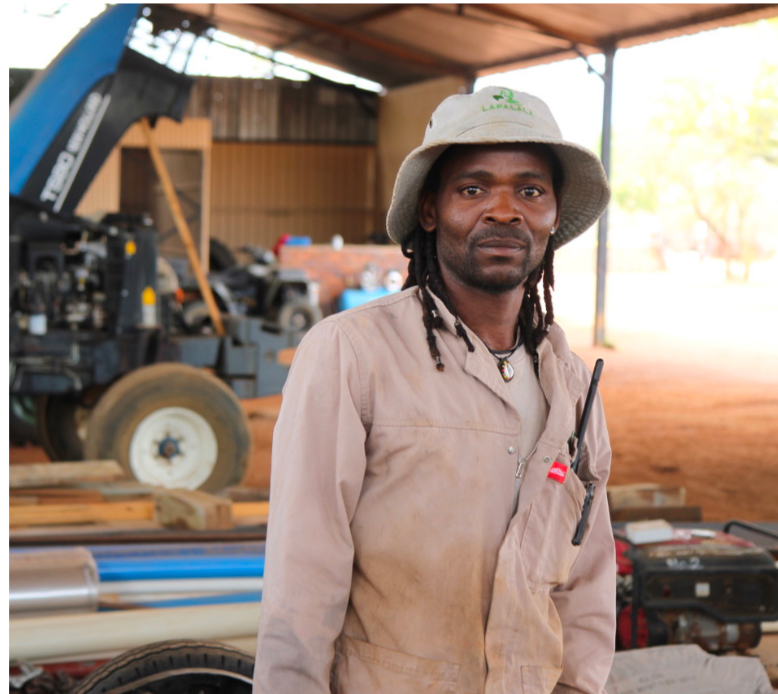 Solomon “Solly” Moloto has been an important member of our maintenance crew since 2015. Solly grew up in Lephalale and, as a child, he always enjoyed fixing things and understanding how they worked. He began his career at a hardware store where he worked for eight years. When Lapalala was looking for a workshop assistant, Solly was a natural choice for the job. Whether he is fixing a leaking pipe or repairing the gearbox on a tractor, Solly’s helpful attitude and cheerful character make our workshop a better place.

Our new “baboon-proof” feed shed at headquarters has turned out to be less resistant to baboon visits than we had hoped! 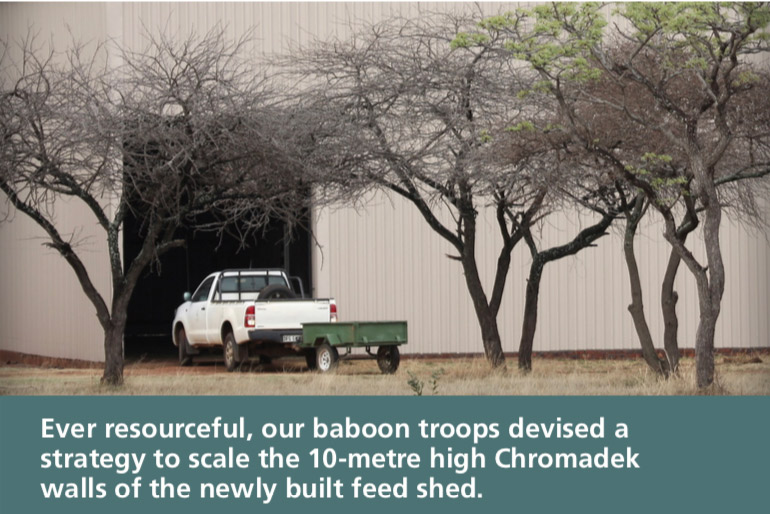 Not even 10 metres of sheer, vertical Chromadek could stop our crafty baboon troops from scaling the walls and entering the shed through the airflow openings at the top. They were also smart enough to do this in the evening when nobody is around to see them.

We proceeded to close the top openings with expanded metal, which seems to have baffled our break-in specialists. They have finally given up trying and the feed we use for our breeding programmes can now be safely stored.

During the current drought conditions baboons will spend their days foraging for leaf buds that are beginning to emerge, or searching for insects under rocks. With the onset of the rains, foraging will become easier as the vegetation begins to flush and tasty invertebrates become more active during the day again. 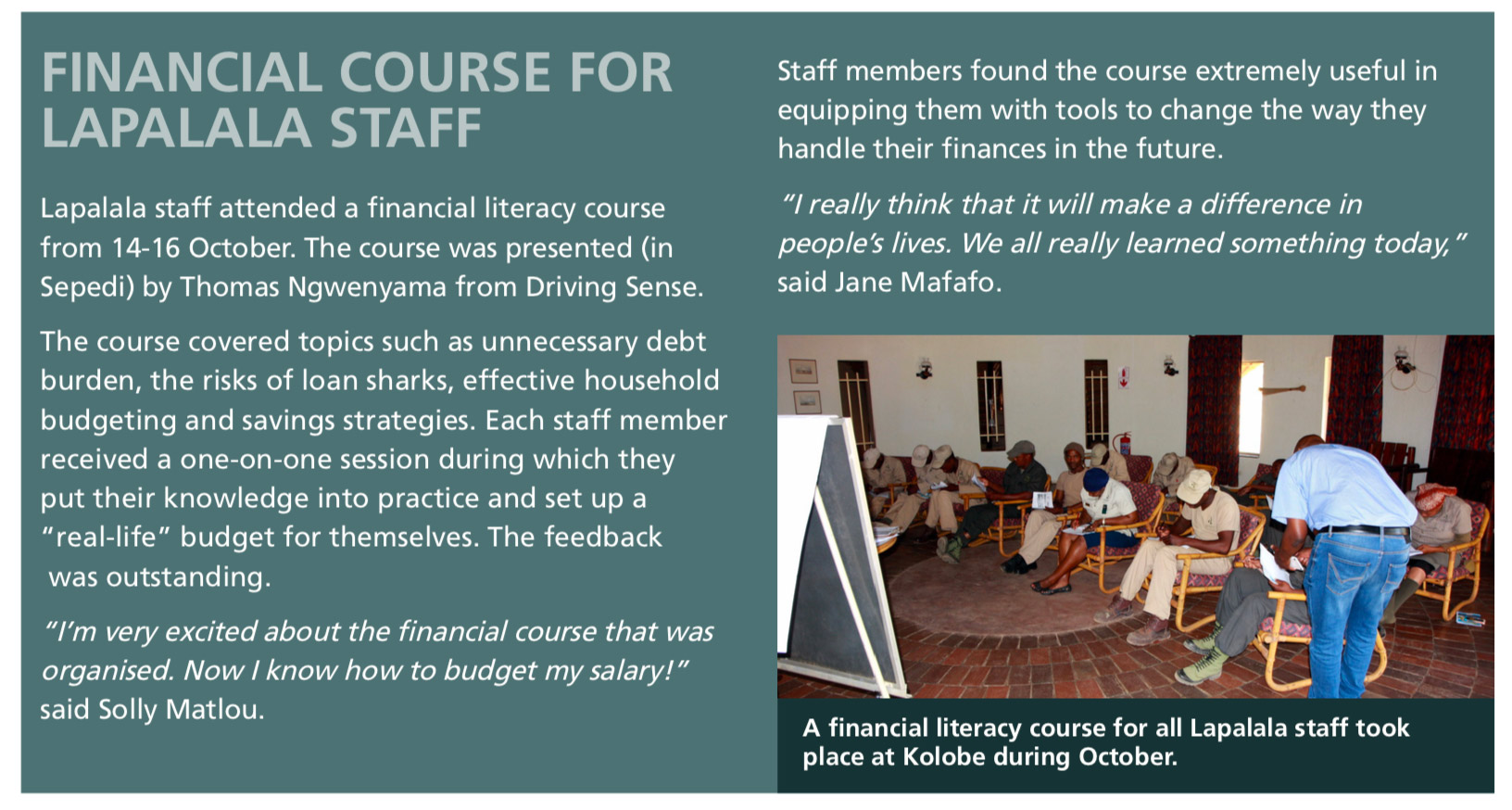 Some of the bird species we find on Lapalala live in a winterless world. They chase the summer across the globe and migrate long distances between the hemispheres. This month, we welcome a few of our summer visitors… 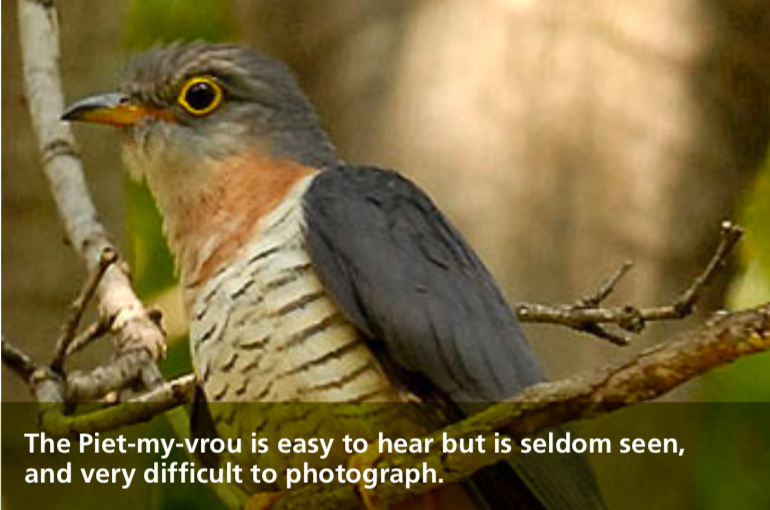 Piet-my-vrou (which literally means “Pete my wife” in Afrikaans) is another name for the red-chested cuckoo (Cuculus solitarius), a species of cuckoo that is well known for its three-note descending call. The Piet-my-vrou arrives in Lapalala in October and, by the end of February, it will have returned to central Africa. These birds are parasitic breeders, laying a single egg in the nest of another bird – predominantly robin-chats. After it hatches, the chick kicks out the other eggs and becomes the sole occupant of the nest. The host then raises the large chick as its own. 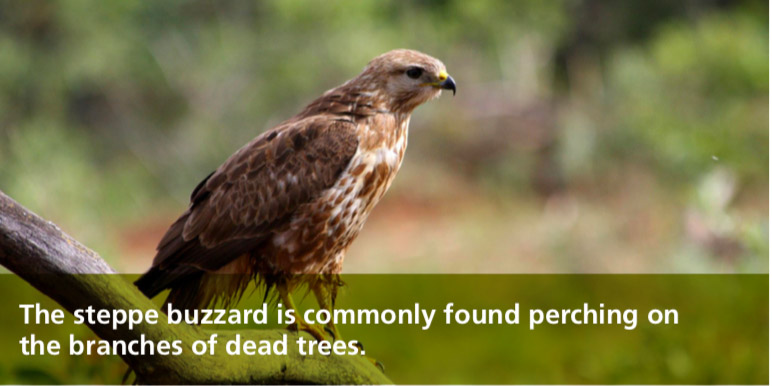 Perhaps our most familiar migrant raptor is the steppe buzzard (Buteo vulpinus). The bird migrates over great distances and its breeding grounds extend from eastern Europe to Siberia. It arrives in Lapalala late in October and departs again in March, although a sighting in early April is not impossible. Steppe buzzards come in a variety of plumages which can easily cause confusion when identifying the birds. Focusing on the barred flanks, buzzard-like tail and head shape is helpful, but be cautious as you may be looking at a honey buzzard. 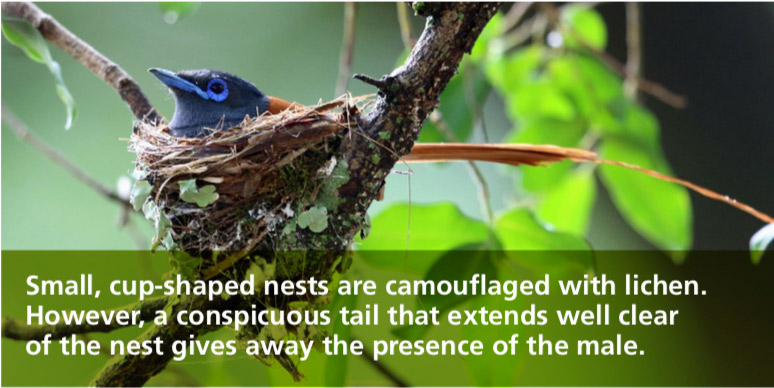 The African paradise flycatcher (Terpsiphone viridis), an intra-Africa migrant, is definitely the most striking of the flycatchers found in Lapalala. Both males and females have chestnut brown upperparts with dark heads and blue eye-wattle ringing their eyes. The birds breed in Lapalala during the summer months, building small cup-shaped nests in branches, often camouflaged with lichen. The male will put on a colourful courtship display to attract a female, flying in a bobbing motion to best expose his bright underparts and long flashy tail. Once a mate is chosen and accepted, African paradise flycatchers are monogamous; they will pair for life. 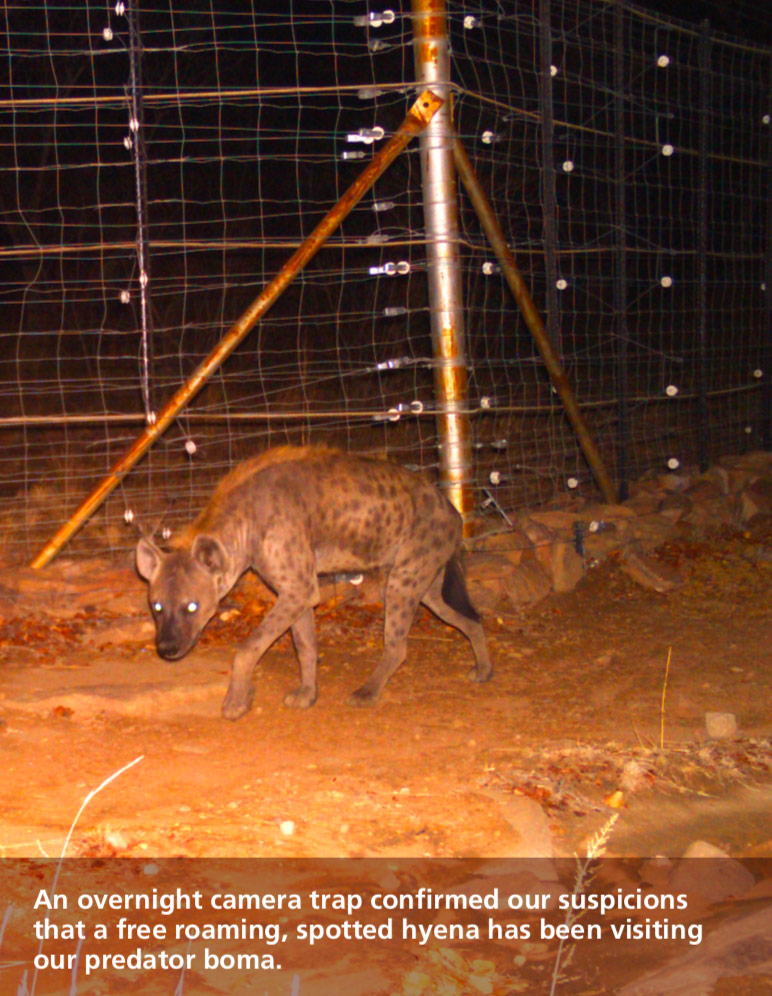 Our clan of spotted hyena appears to have attracted the attention of a free-wandering spotted hyena. Fresh hyena tracks have been visible on the outside of the predator boma where our eight spotted hyena have been settling well into their temporary home.

Our biodiversity manager, Hermann Müller, first noticed the tracks that appeared quite sporadically but are now seen every morning. It can be difficult to distinguish brown hyena from spotted hyena tracks, but an overnight camera trap confirmed our suspicions that we have a wild spotted hyena visiting our clan. Earlier this year, we had reports of three sightings of spotted hyena on the reserve and we think this may well be the same individual. One evening, a clear hyena whoop call could be heard from reserve headquarters. This very loud and musical call often starts with a very low tone, which is then modulated up and down in pitch. The distance and terrain between headquarters and the predator boma make it unlikely for this call to have come from the predator boma, so this was probably our free wanderer calling. The hyenas will be released in November and we hope that he will join the clan.

Our Facebook page has reached 2,500 likes this week! Help us by liking and sharing our page to receive even more news and updates from the reserve.