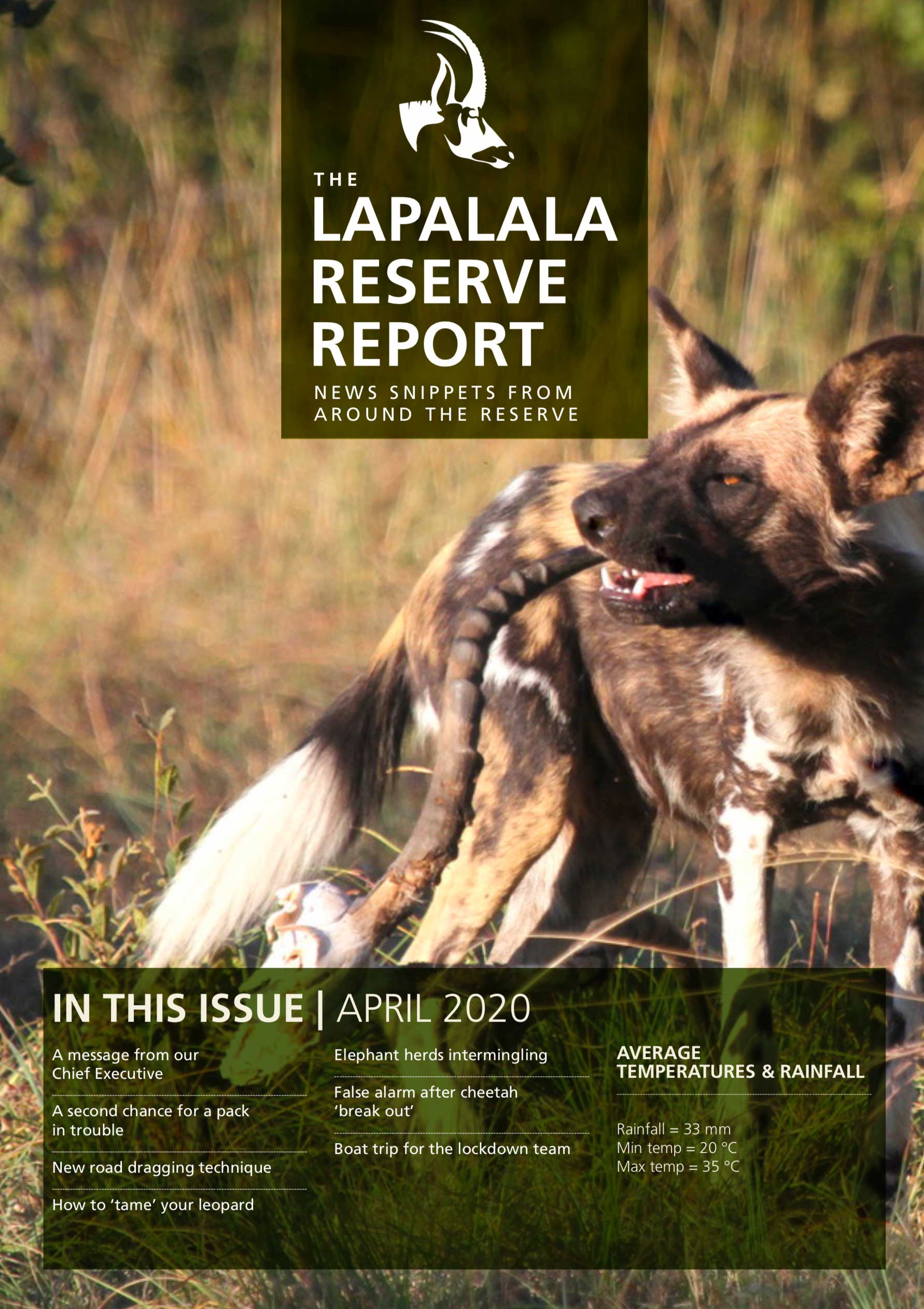 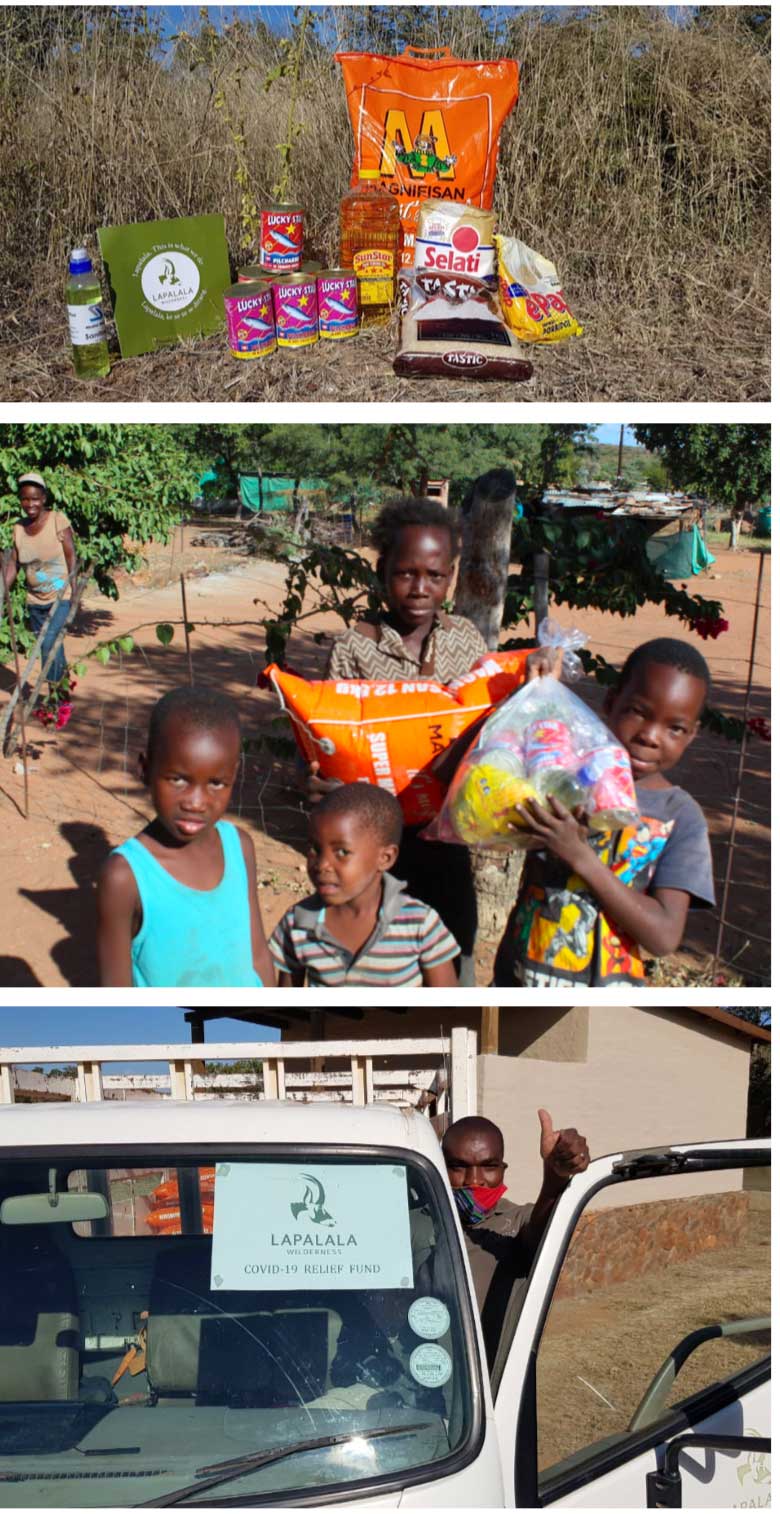 His Excellency Mr Cyril Ramaphosa, announced a national lockdown. Employment in the Waterberg region is mainly reliant on game farming, hunting and tourism. These industries – and tourism in particular – have been severely impacted. Sadly, our local communities are particularly vulnerable to the loss of jobs and income.

The Lapalala Wilderness Foundation Community COVID-19 Relief Fund was launched this month, to respond to the needs of these communities. The fund is the brainchild of one of our founder custodians and owners of Modumela Lodge, Christian and Steph Gonzalez. Together with their family in Manila, they generously supported the initiative to provide food parcels to our neighbouring communities of Thekwane, Uitspan and Daggakraal.

On the back of this initiative, we have secured further donations from the Lapalala custodians, and we hope to be in a position to make at least three more deliveries in the weeks to come.
More to follow in the next report!

One of the world’s last free-roaming packs of African wild dog has been successfully captured and moved from a farming area near Vaalwater to Lapalala’s predator boma.

African wild dogs are often persecuted and killed by farmers who fear for their livestock. This particular pack was severely threatened, and we needed to act quickly to give these dogs a second chance. The translocation is the start of an exciting project which will see Lapalala Wilderness collaborate with the Endangered Wildlife Trust (EWT), supported by Tintswalo at Lapalala. 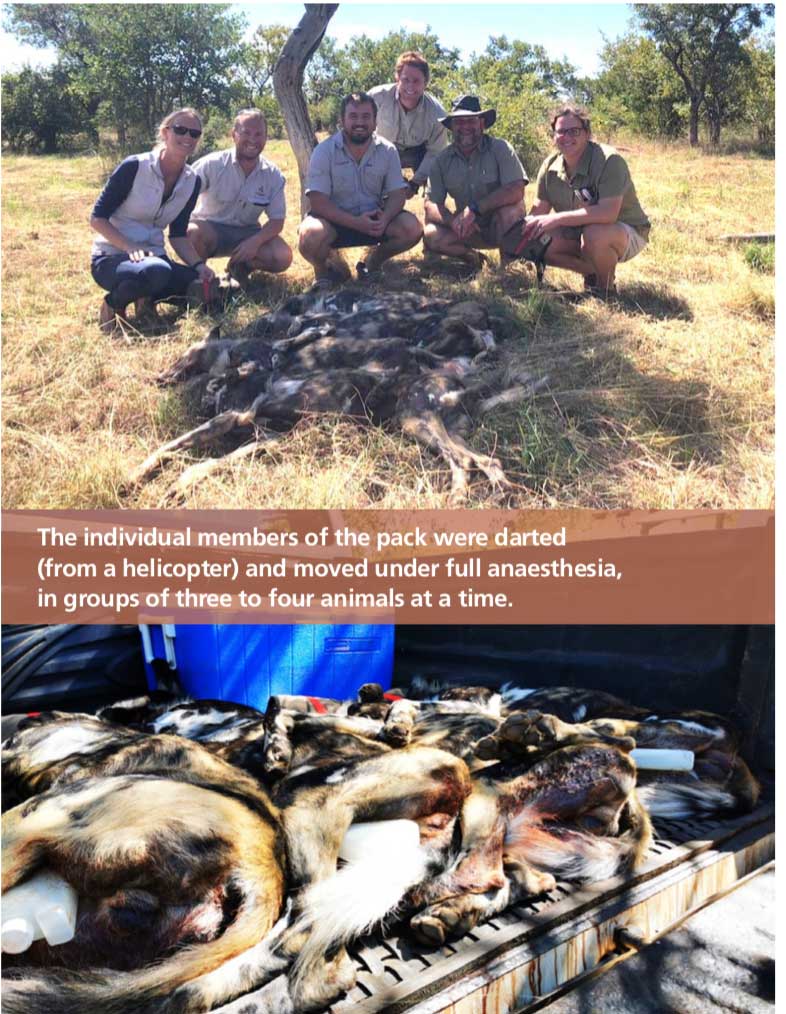 The pack consists of 10 African wild dogs. With the help of old photographs from the EWT, we have established that the pack consists of an original alpha male and alpha female plus their offspring from two previous litters in 2018 and 2019. The dogs will be kept in Lapalala’s predator boma during the denning season (which usually lasts about three months) so that the dogs can produce a further litter in a safe and protected environment. Lapalala’s wildlife management team has created a photographic identity kit to make it easier to recognise each individual member of the pack. This identity kit can be made available upon request.

The International Union for Conservation of Nature (IUCN) classifies African wild dog as endangered, and global efforts are under way to conserve the few remaining populations of the species. Lapalala is potentially a safe place for this pack, however free- roaming wild dogs have little regard for fences. While they are confined to the boma, we hope that the dogs will learn to respect our electrical fences so that they are more likely to stay on the reserve for a longer period after their release. Only time will tell if they choose to remain on Lapalala. An innovative research project will explore advanced technologies to monitor and confine the pack more reliably inside the reserve following their release. 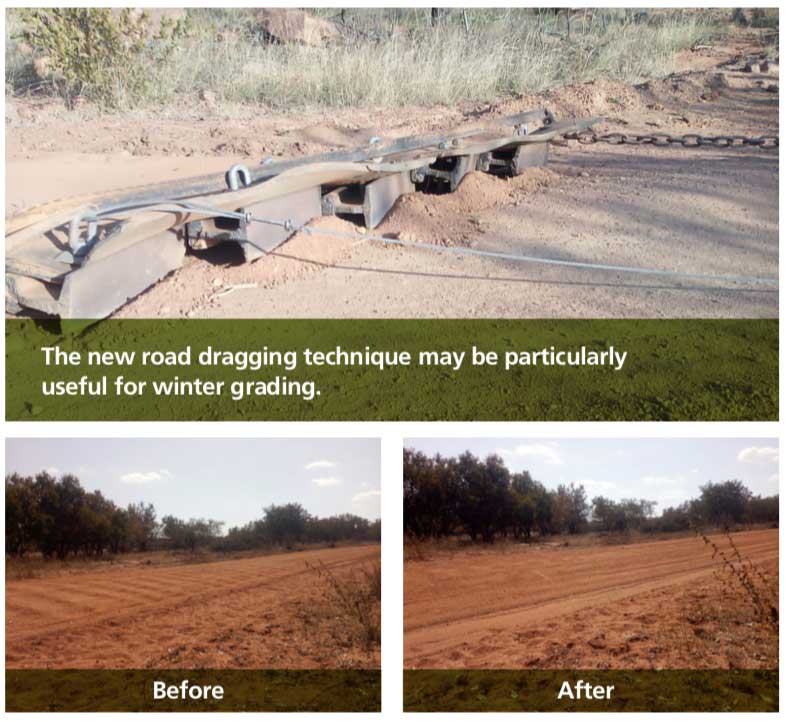 Gravel roads require on-going maintenance, not least of all to tackle the problem of ‘washboarding’ – or corrugation, as it is locally known.

Corrugation is formed by a combination of three factors: vehicle tyre pressure, speed and suspension. Traditionally, this problem is addressed by dragging large tyres to level the surface. This is effective to a certain extent, but material is still lost off the side of the road.

Lapalala operations manager, Cobus Greyling, used the lockdown period to develop a new road dragging technique that fills some of the corrugation by moving displaced soil material back onto the road surface. This technique is also a promising solution to the problem of grading gavel roads during winter, when compaction is hampered by low soil moisture content. 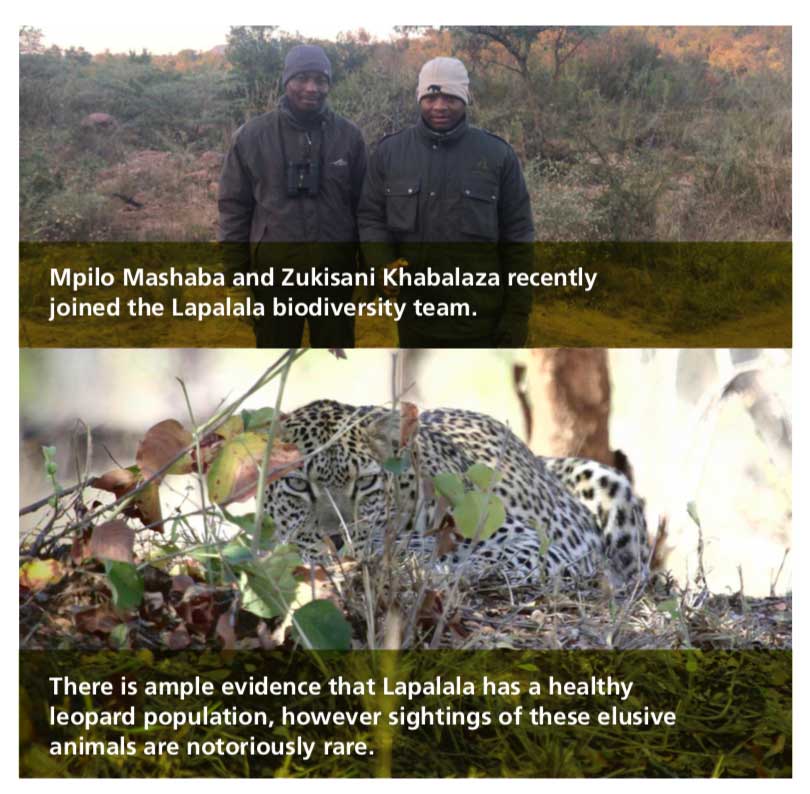 HOW TO ‘TAME’ YOUR LEOPARD

Lapalala recently welcomed Mpilo Mashaba and Zukisani Khabalaza to the Lapalala Wilderness biodiversity team. The two graduates of the South African College for Tourism Tracker Academy will spend the next 12 months attempting to gain the trust of our elusive leopards.
Mpilo and Zukisani are fresh out of a promising leopard habituation project currently being conducted in Akagera National Park, Rwanda. They will be using this experience, together with the tracking skills and knowledge gained during their studies, to get to know the intricacies of Lapalala’s leopard population. Over time, they will hopefully gain the trust of certain individuals. And with increased and responsible exposure to humans and vehicles, we hope that these leopards will gradually grant us more regular opportunities to observe them.

This month we recorded the first ever sighting of a close encounter between our two elephant herds. In ‘elephant terms’ Lapalala is not that big, so the herds will invariably meet from time to time. However, it was particularly special to witness such a gentle and positive encounter between our Makalali and Touchstone herds.

The Makalali herd was drinking at the dam at Roan Plains when the Touchstone herd arrived. The animals, including the six-month-old calf in the Makalali herd, formed a circle to check (and sniff) each other out before beginning to mix freely, amidst friendly rumblings.

It is particularly encouraging to see that our Touchstone herd appears to be more at home and secure on the reserve. The original members of this herd were orphaned following culling in the Kruger National Park.

They were then relocated to a reserve where elephant hunting took place, so they were understandably skittish when they arrived at Lapalala. After their release on the reserve we avoided unnecessary encounters with the herd, instead focusing on an occasional attempt at a ‘positive’ meeting. The herd would often move away when approached, but we have seen major improvements in their response to vehicles and people in the past two years. 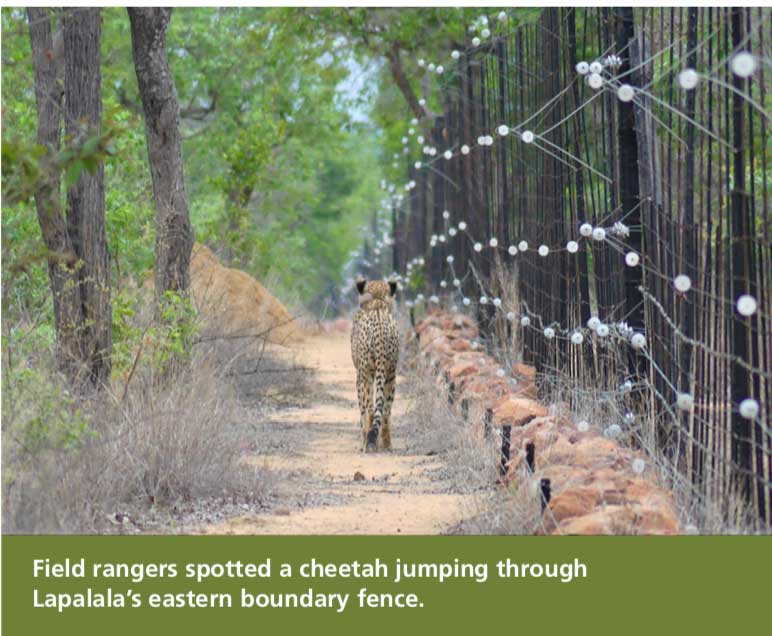 Our management team endured a decent run-around after reports that one of our cheetah may have broken out of our eastern boundary fence onto the R518 road.

Field rangers spotted the cheetah as it jumped the fence and our wildlife team was quickly dispatched to investigate. An escaped cheetah poses a number of problems: life ‘on the outside’ is fraught with danger, and recovering an escaped cheetah is potentially risky, especially when helicopter darting is necessary.

The wildlife team tracked our ‘escapee’ onto a neighbouring property, but managed to find no VHF signal or visual sighting of the animal. Our biodiversity manager, Hermann, decided to use our VHF telemetry system (from the gyro plane) to get to the bottom of the mystery. The VHF signals from our six, resident, collared cheetah were easier to pick up from the air, and we soon confirmed that our cheetah were safely inside the reserve. In fact, they were all far from the eastern boundary, blissfully unaware of the commotion surrounding their whereabouts!

We now suspect that the rangers saw a vagrant cheetah leaving the reserve. Vagrant, free-roaming cheetah are very skittish and seldom seen, but our camera traps have caught them on the reserve, more than once. It’s great to know that these ultimate survivors continue to visit Lapalala.

BOAT TRIP FOR THE LOCKDOWN TEAM

The Lapalala lockdown team was treated to a boat trip on Kubu Dam during the first three weeks of the national lockdown.

The outing was planned to lift the spirits during these unusual times, and thank the staff who had volunteered to stay on Lapalala with their families during level 5 of the lockdown. Lapalala is very grateful for the team that remained so that the essential work on the reserve could continue. 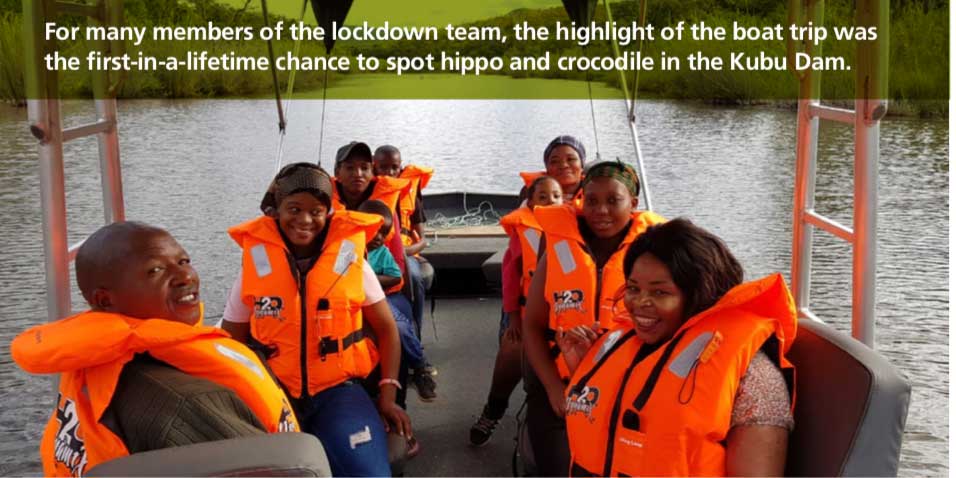