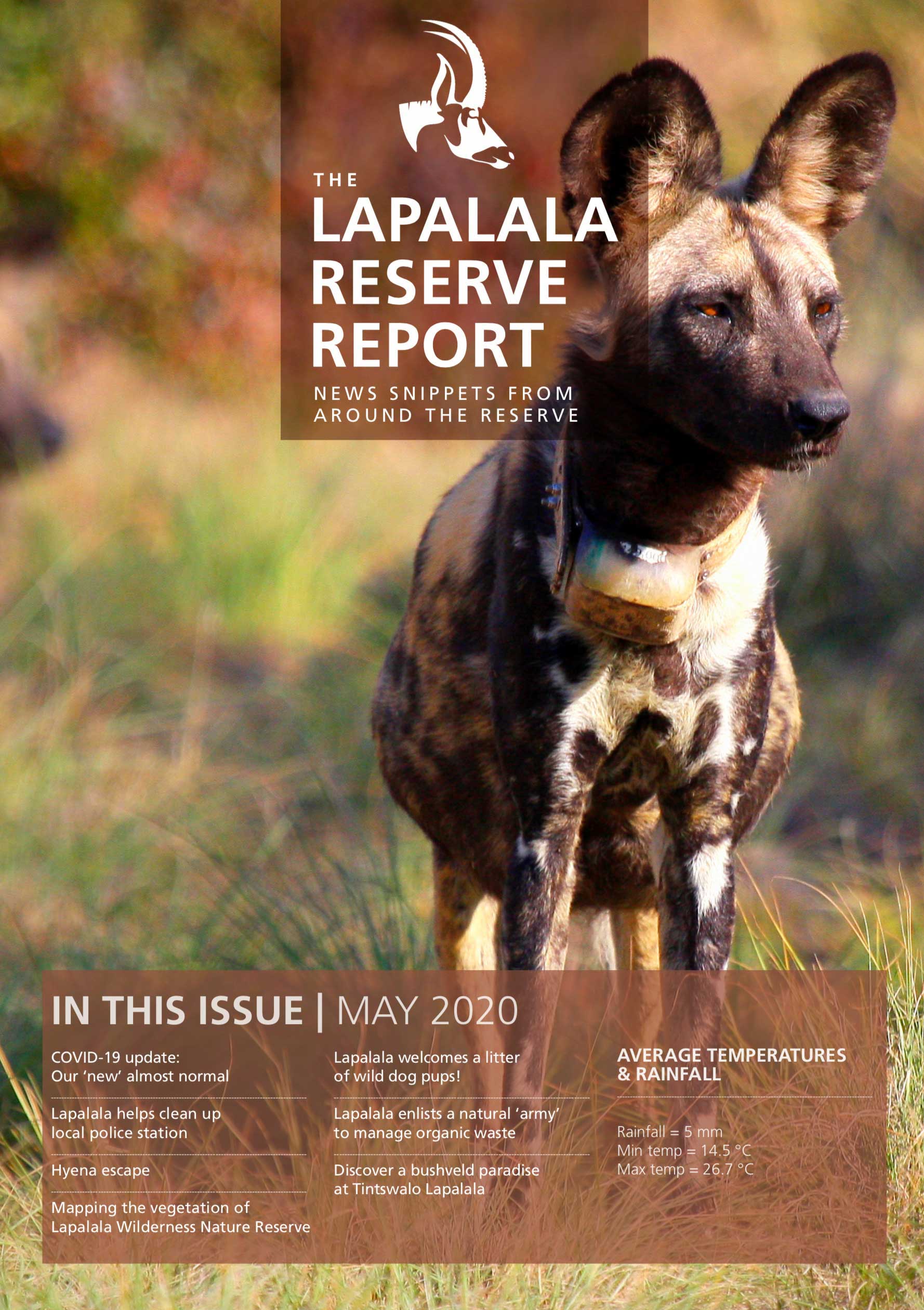 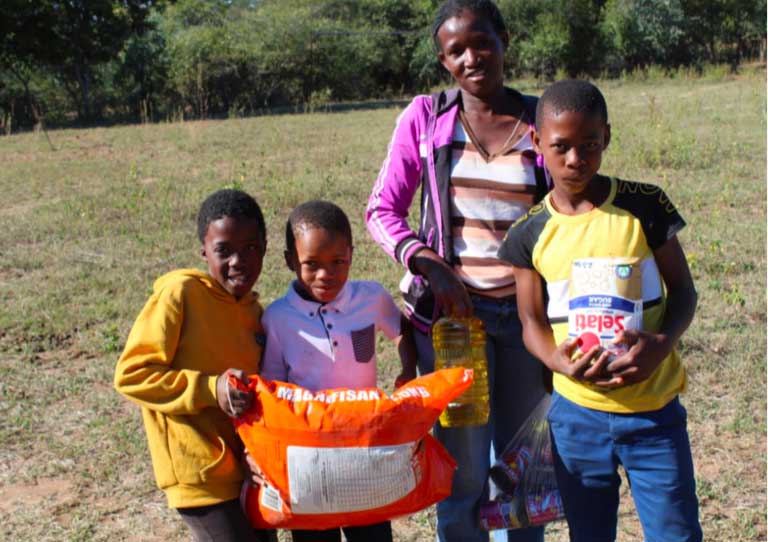 As of 1 June 2020, reserve operations have all but returned to normal. We continue to monitor the health of our staff and implement the recommended precautions of social distancing, hand sanitising and the wearing of face masks. External contractors are now also permitted back onto the reserve. Only business travel is allowed under the current lockdown level 3 regulations, but we hope that the restrictions on domestic leisure tourism will soon be relaxed.

In anticipation of this, our lodge partners have been putting the required operational safety measures
in place. We are all holding thumbs that this will happen sooner rather than later.

We would like to thank all our custodians for their incredibly generous contributions to the Lapalala Wilderness COVID-19 Relief Fund. Once again, staff from Noka Camp, Tintswalo Lapalala, Lapalala Wilderness School and reserve management came together to pack food parcels for the communities of Thekwane, Uitspan and Daggakraal. On 22 May, Mashudu Makhokha and his team spent the day painstakingly going from door to door to ensure that the second delivery of food parcels reached the 521 families living in these communities. All three villages were greatly in need of assistance, and the food parcels were gratefully received. 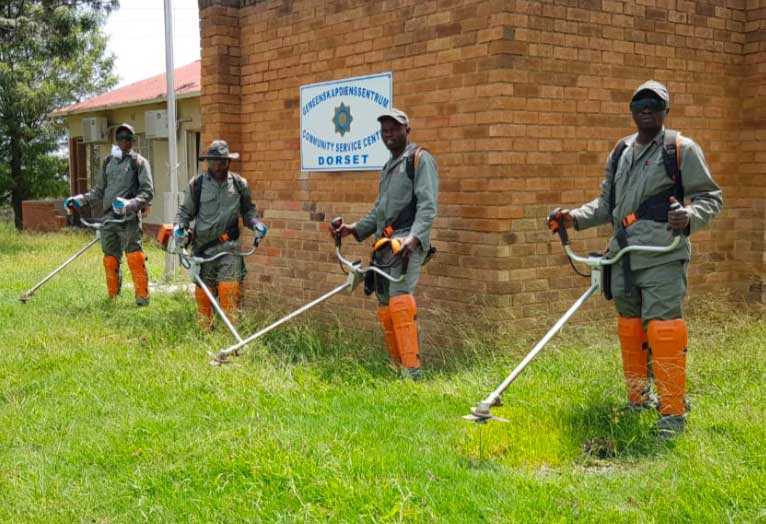 The Lapalala bush clearing team lent a hand to tidy up the grass around the Dorset police station.

During a recent visit, our management team noticed that the grass around the police station had grown very long and untidy. They offered the help of our bush clearers who brought along their brush cutters and spent a morning at the station, cutting the build- up of grass around the buildings.

The team at Dorset police station was very grateful for Lapalala’s assistance, and we will be planning similar initiatives in the future. 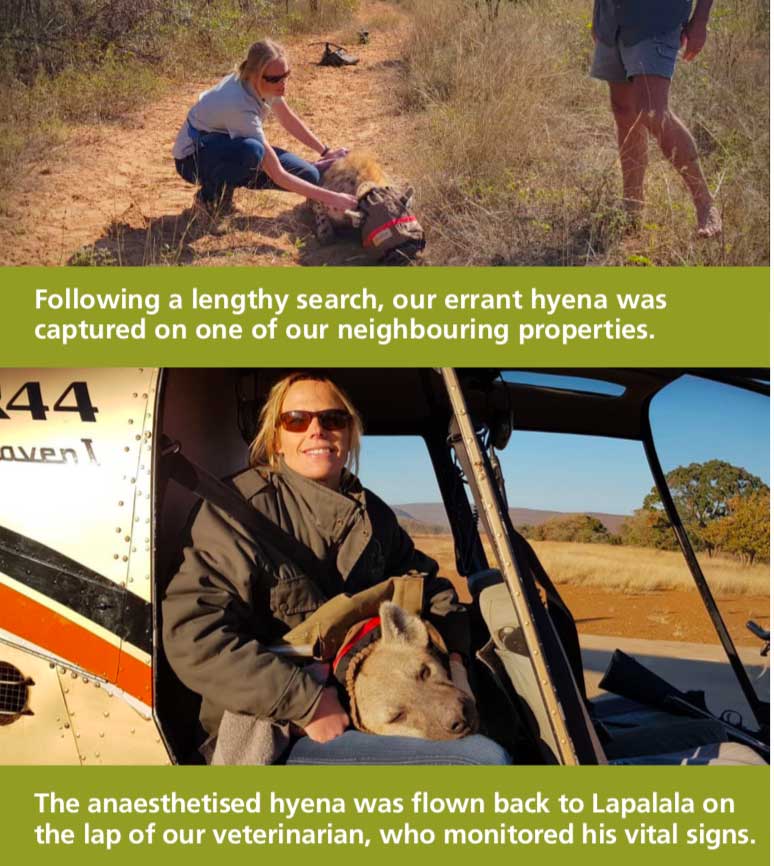 One of our adult male hyenas went walkabout on our neighbouring farms this month, before being flown back home on the lap of our veterinarian!

The spotted hyena escaped through a damaged section of the perimeter fence. Fortunately, the hyena was collared so we soon discovered his getaway. Our neighbouring farms reported seeing (and hearing) him on their properties, however he seemed to be
in no rush to return to Lapalala. After five days of monitoring and communicating with our neighbours, our veterinary team launched a lengthy search effort to capture and return the hyena safely to Lapalala. After the short flight, the hyena was transferred to a waiting bakkie which delivered him to the nearby predator boma.

We are currently assessing if any more hyenas have left the reserve, as not all of our hyenas are collared. 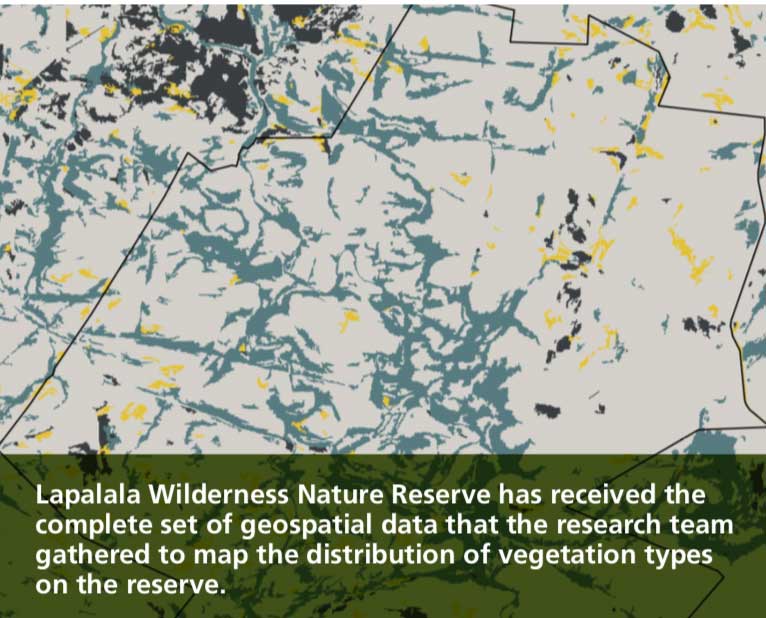 Lapalala’s vegetation mapping project is nearing completion. In a first for the reserve, the project set out to assess and map the distribution of vegetation types on Lapalala. Plant ecology student, Chevonne Fisher-Botha, started her fieldwork in 2018 under the supervision of Dr Peter le Roux of Plant Sciences, University of Pretoria and influential vegetation scientist, Professor Laco Mucina. The research project is a component of Chevonne’s Master of Science (MSc) degree, and is funded by the Mapula Trust. The vegetation map for Lapalala Wilderness Nature Reserve will provide valuable insights for ecological decision-making on a multitude of levels.

Our wild dog pack welcomed a litter of pups this month. The event was not without a few anxious moments, but we’re happy to report that all’s well that ends well. 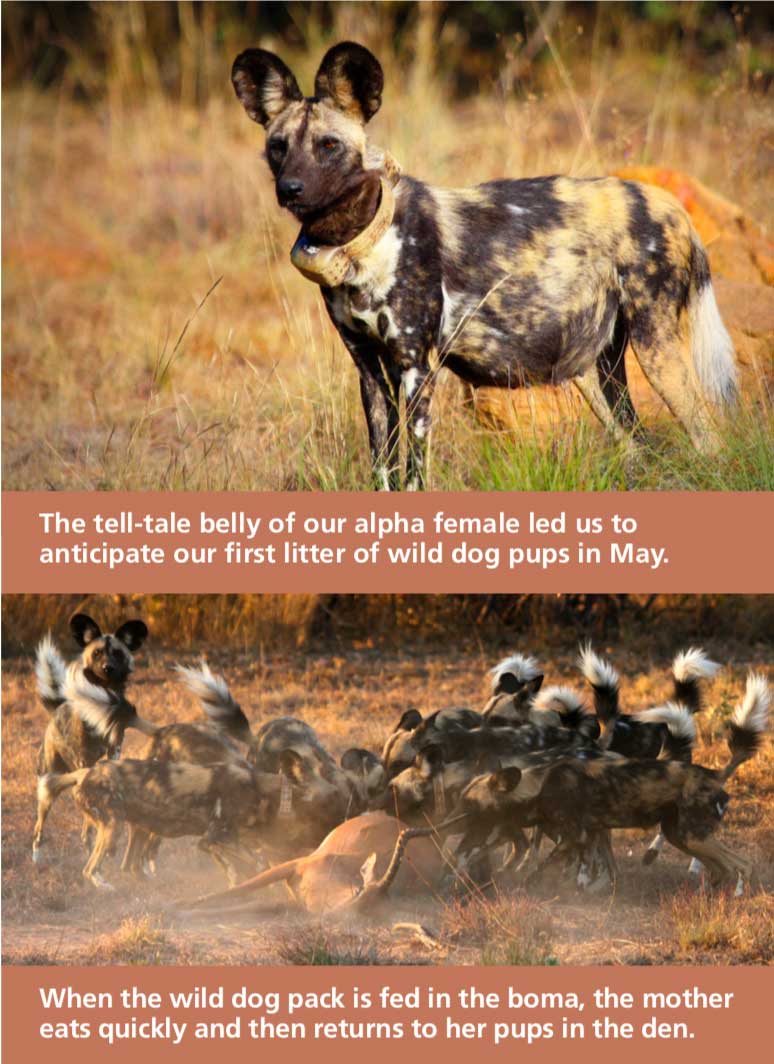 Early in May, our conservation team noticed that the alpha female in the boma had a rapidly growing belly. Our suspicions were confirmed when we discovered a litter of newly born pups on the morning of 22 May. The alpha female had given birth during the night, and the pups were lying in a small hollow within a patch of Grewia plants. In the wild, females usually den underground, however there were no existing dens or burrows in the boma. At this stage, the pack of wild dogs was still in the boma adjacent to the one in which the artificial den had been constructed. The conservation team was worried about the pups remaining above ground. There was a cold front on the horizon, and the pups faced a potential threat from the other dogs in the pack, which was likely to increase the stress on the alpha female (normally the older dogs would only see the pups when they emerged from the den by themselves).

After extensive discussion and advice from experts at the Endangered Wildlife Trust (EWT), and a number of wild dog experts in the field, the Lapalala wildlife management team decided to move the pups to the artificial den to increase their chance of survival. Our conservation manager (wearing gloves and a face mask) carefully lifted the pups into a sterile, open crate and moved them in full view of the female so that she could easily follow him. He also left a scent trail of soil from their birth site. The combination of their strong scent and loud noises led the mother to the artificial den within five minutes of our conservation manager leaving the boma.

For live updates on the wild dog pack in the boma, connect to the PaintedDog TV Channel or visit the Lapalala Wild Dog Blog Facebook Page. 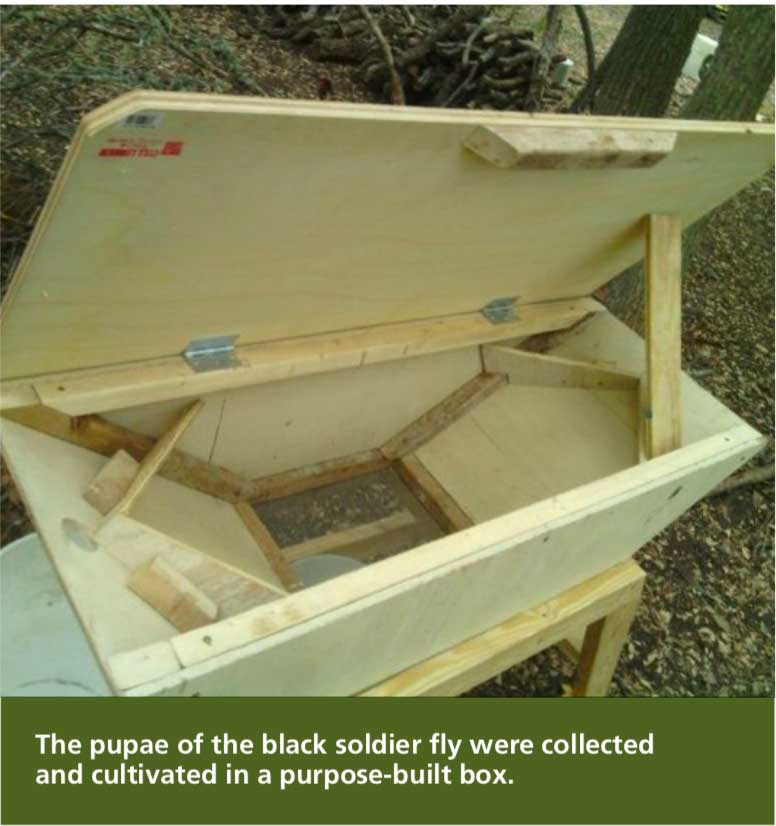 The responsible and sustainable management of waste is an ongoing challenge for wilderness areas. Traditionally, these areas are far removed from municipal services and generate various forms of waste from staff and tourists. Waste needs to be handled in an environmentally conscious way to prevent pollution of the pristine habitat.

In 2019, Lapalala Wilderness launched a recycling programme to manage waste. Organic waste needs to be separated and treated hygienically because it contaminates recyclables. A useful ally in this task is the compost earthworm (Eisenia fetida). This worm processes organic material, producing valuable compost at the same time. However, any waste containing citrus, meat or dairy is a death sentence for these creatures so the system needs to be carefully managed.

A more realistic option for a large reserve like Lapalala, is the black soldier fly (Hermetia illucens). Black soldier fly is a common, widespread species that occurs naturally on Lapalala. The maggots of the black soldier fly devour any kind of organic waste very effectively. The flies do not spread far from the food source and actually inhibit the proliferation of houseflies, which is an additional benefit. Lapalala has enlisted this natural ‘army’ by collecting and cultivating the fly pupae in a purpose-built box. The flies have been breeding successfully and it is envisaged that these little soldiers will play a major role in the treatment of waste on Lapalala. 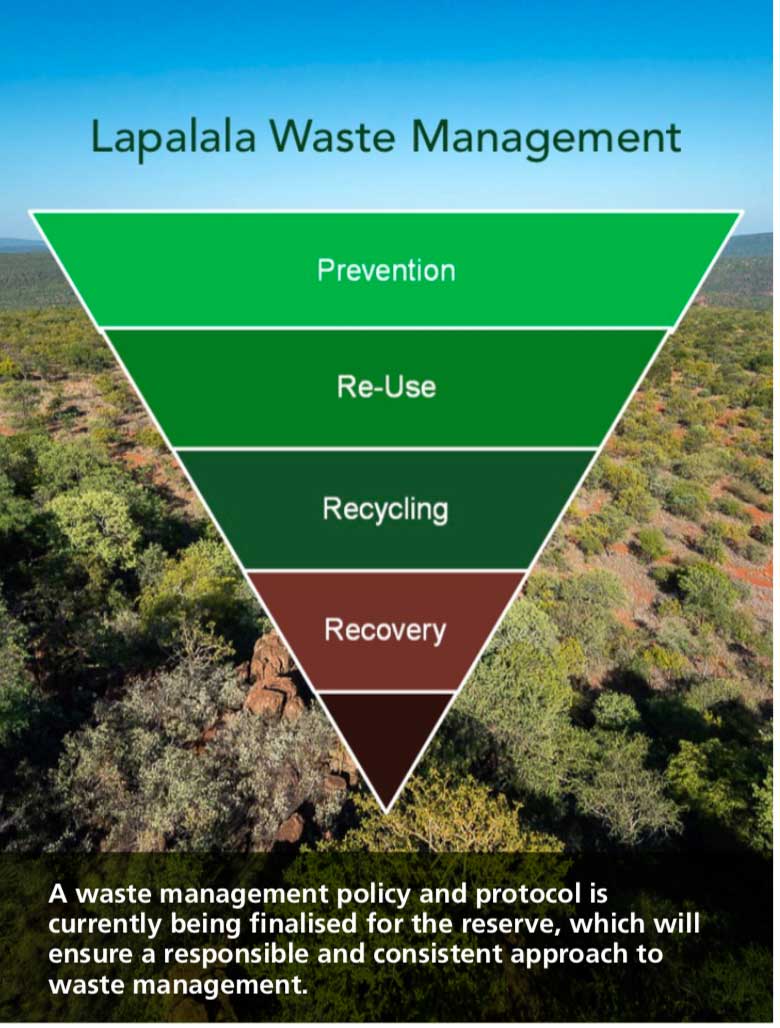 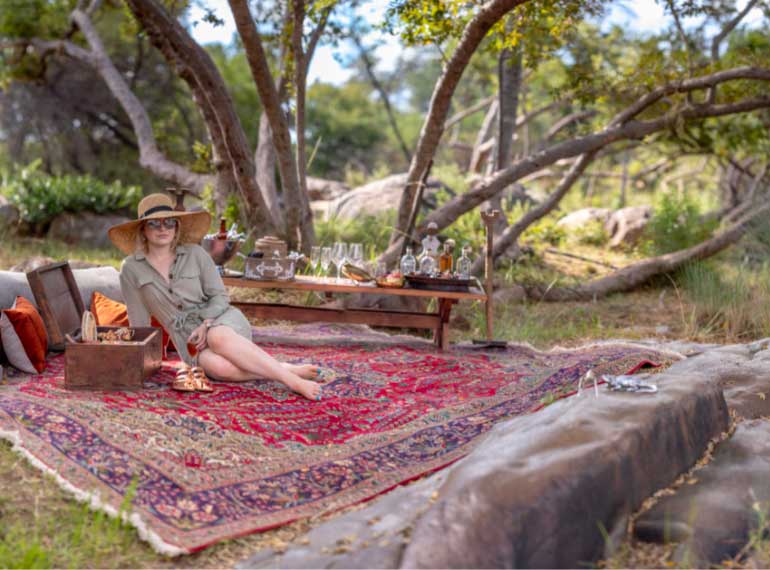 The expansive Lapalala Wilderness Reserve is a private, untouched sanctuary that features an abundance of wildlife, bird species and breath-taking views.

Tintswalo Lapalala offers seven luxury tented suites with private plunge pools and views across the waterhole frequented by rhino and general game. Beyond the experience of a ‘Big Five’ safari, guests can also visit the endangered wildlife breeding programme or explore early Iron Age and rock art sites to learn more about the ancient bushman paintings. Other leisure activities include sunset cruises, fishing or simply relaxing with a lavish picnic set up along the banks of the Palala River. 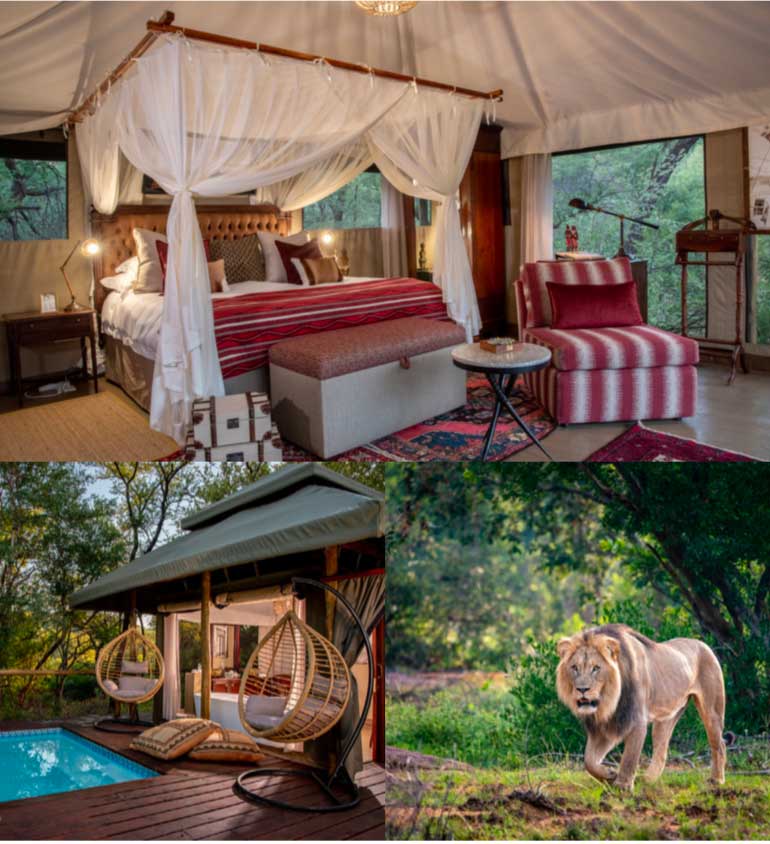 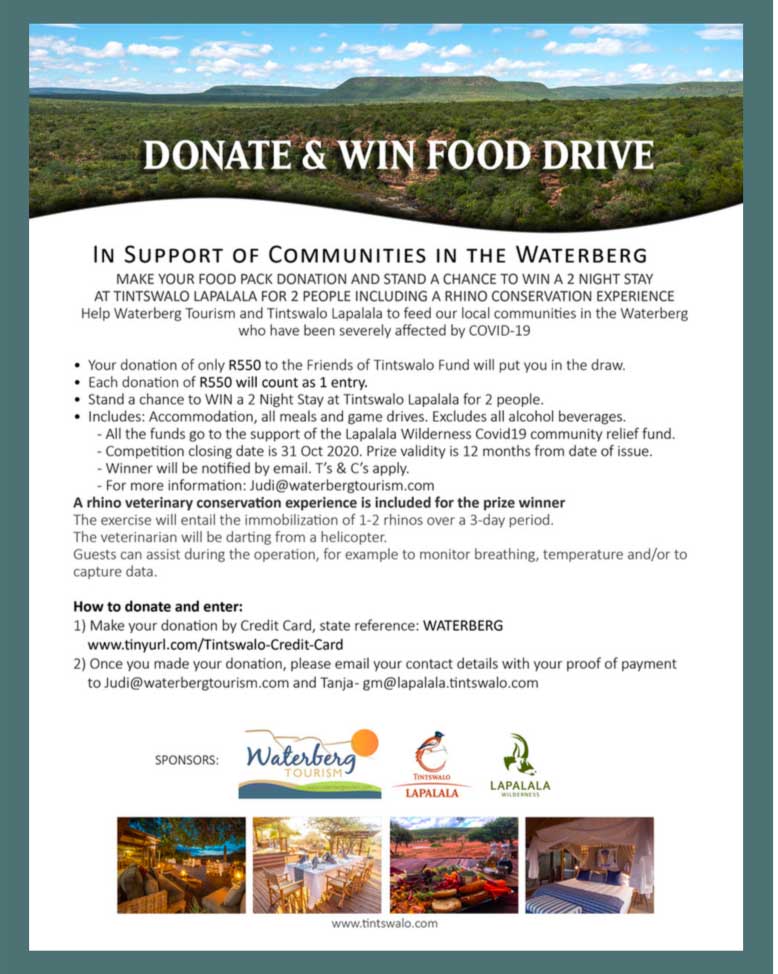