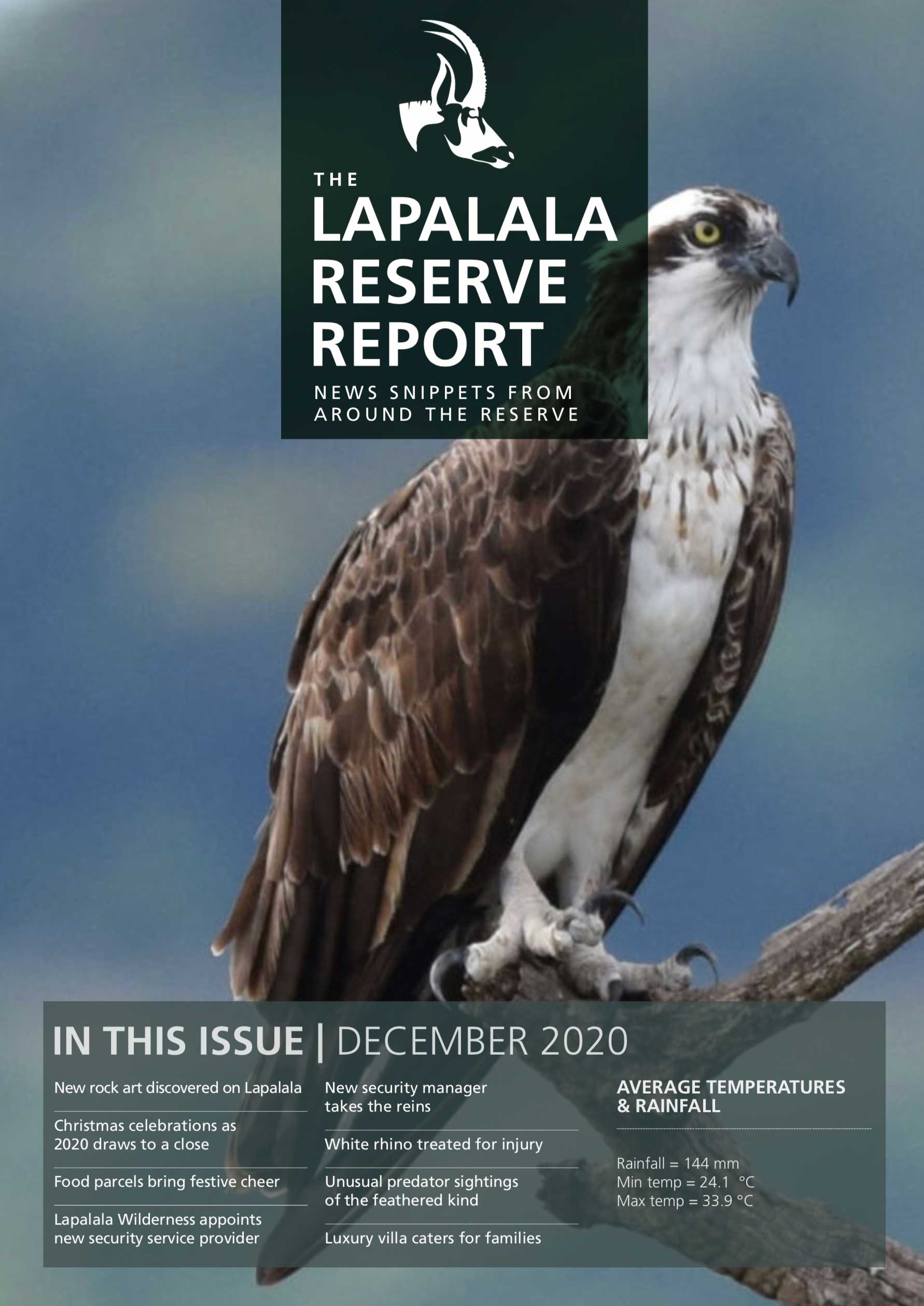 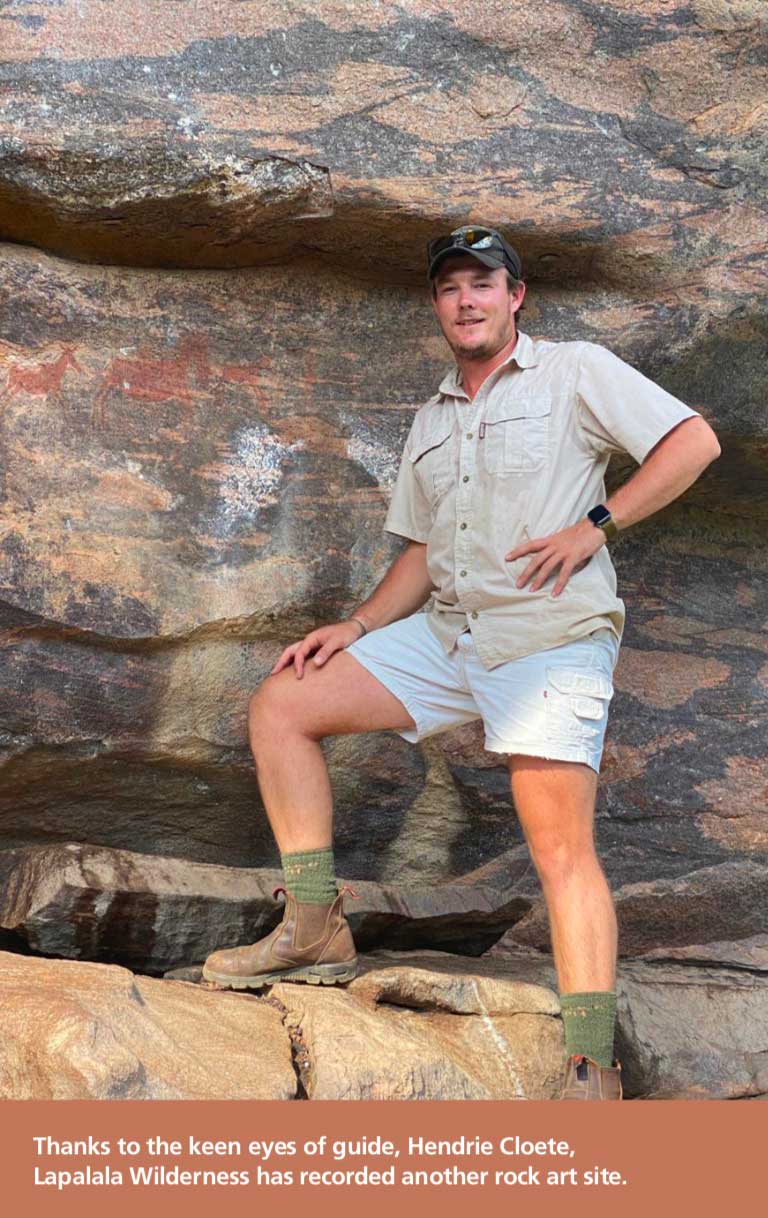 The Waterberg is home to numerous rock art sites, so it was a privilege for us to discover another site on Lapalala Wilderness this month.

Lepogo Lodge guide, Hendrie Cloete, became curious when he spotted something that looked out of place, high up on a cliff face. On closer inspection through the lens of a camera, he thought he could make out some rock art. There was no record of rock art in the particular area, so Hendrie informed Lapalala ecologist, Hermann Müller, and they devised a plan to take a closer look. This was easier said than done with the site halfway up a cliff face! Despite the challenging ascent, the pair was undeterred. In order to create the rock art, someone must have forged a route to the site. They were confident that they could too!

After a few false turns and many scratches from the dense undergrowth, they emerged at what they hoped was the right ledge. The trek turned out to be worthwhile – just a couple of metres above them was the ancient art they were hoping to find. Perched high above the water, the site is so serene that it became clear why the Khoisan had chosen it. It soon dawned on our intrepid explorers that they were probably the first people to stand there for hundreds of years.

Lapalala still holds many secrets… how many will remain undiscovered? 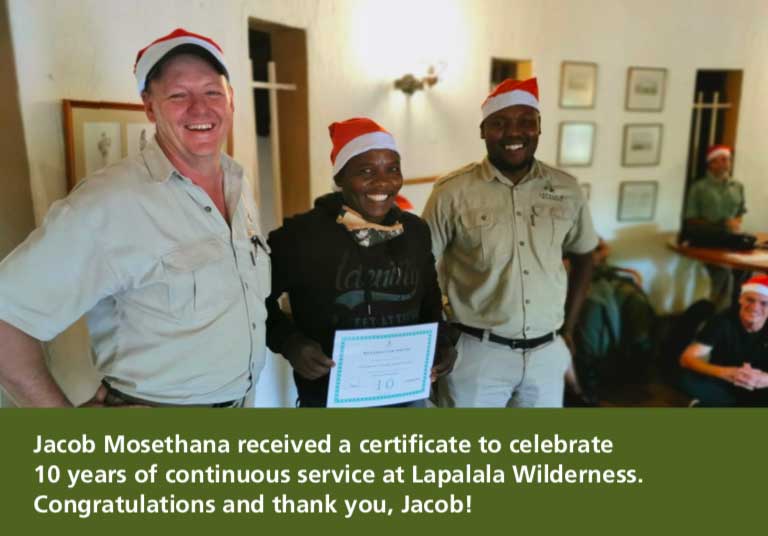 After some early morning food preparation, the event started at midday with a prayer and singing. Everyone tucked into the delicious Christmas meal before a special screening of a film that was created to showcase the work being done on Lapalala.

The room was filled with excitement and laughter as staff saw themselves on the big screen!

After the movie and handing out of certificates, the staff rose to the challenge of a fun-filled team building exercise. We were divided into eight teams to compete in a two-part challenge. The marble relay required teams to manoeuvre a marble through a set of five connected pipes. This was followed by the ‘stone-in-the-bucket’ game, in which each team member had to carry a stone between their legs and drop it into a bucket on the opposite side. Team eight won both events to clinch the winner’s title: Koos Nkhumane, Daniel Matlou, Alpheus Molekoa, Thabisa Makgobatlou, Albert Mokitlana, Jane Mafafo, Joel Mabote and Hermann Müller.

The party wound down with a final challenge, followed by the last serving of food. Then everyone returned to their units with memories of a great day to end a challenging year.
By Reletile Mokomane 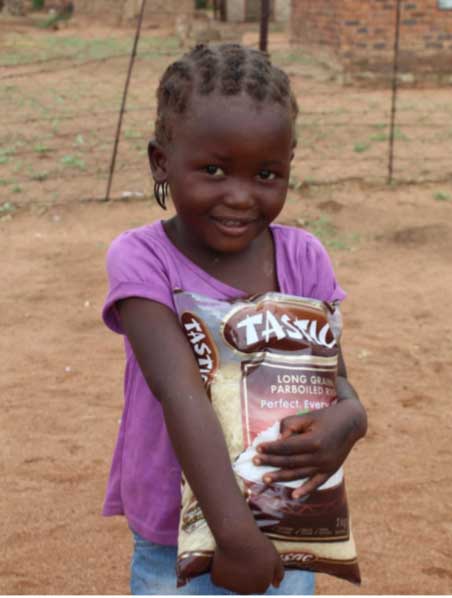 The COVID -19 outbreak in South Africa has forced the government and private sector to intervene to ensure that vulnerable households have access to safe, nutritious food during the national state of disaster.

In the spirit of our president’s call to ‘thuma mina’ (send me), the Lapalala Wilderness Foundation continued to provide food parcels to families in the three villages near the reserve. Almost all households in these villages live below the poverty line, with many people facing temporary or permanent disruption to employment due to the pandemic. And with schools closed for the long December break, children who usually benefit from school feeding programmes missed out on the meal that they receive at school. The food parcels went a long way to bring some festive cheer to those most in need.

We took the decision to appoint a new security provider following a number of poaching incidents and the arrest of two members of our previous service provider, Waterberg Ranger Services, for various crimes (including two poaching incidents on Lapalala).

We faced the very real possibility that additional members could be involved in poaching on Lapalala, so it was decided to fast track the appointment and hand over to a new security provider. With input from our new security manager, JP Viljoen and a detailed assessment of potential service providers, it was decided to award the contract to SES.
By Glenn Phillips 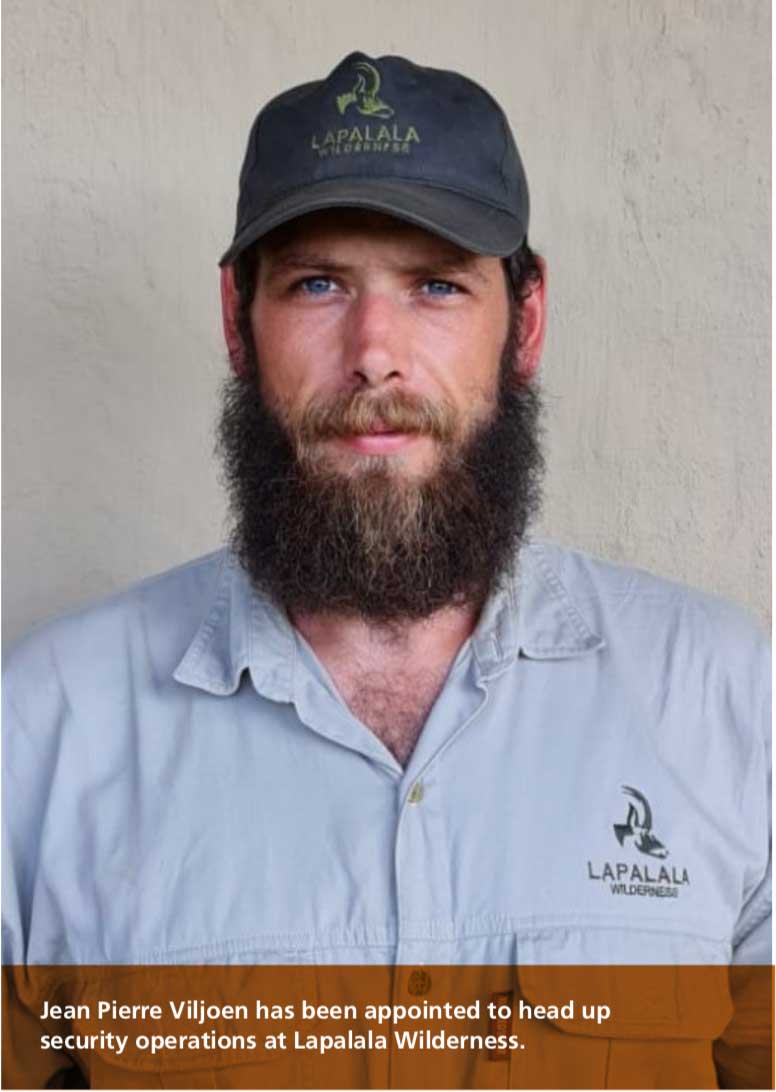 Prior to his appointment, JP worked for Secret Eye Surveillance for four years, of which two years were spent as the security operations manager for the Waterberg Safety Initiative. In addition to his anti-poaching experience, JP brings valuable insight into the crime situation in the areas immediately surrounding the reserve. He is ideally suited for the role of integrating and securing both external and internal security layers, which is a great advantage for Lapalala Wilderness.

We welcome JP and his fiancé, Kelsey, and we wish them much happiness.
By Glenn Phillips

Radimpe – a white rhino cow that many of us know well – recently needed treatment for an injury. Field rangers found her with a large, infected puncture wound to her hindquarters, most likely inflicted during a fight with Motopi, the dominant bull in the area.

The veterinary team was concerned about maggots in the wound, as these fly larvae can prevent healing and even worsen the wound. Radimpe was darted so that the wound could be treated before she was back on her feet a short while later.

A group of Tintswalo guests happened to be in the area on a game drive and was lucky enough to be invited to witness the operation. 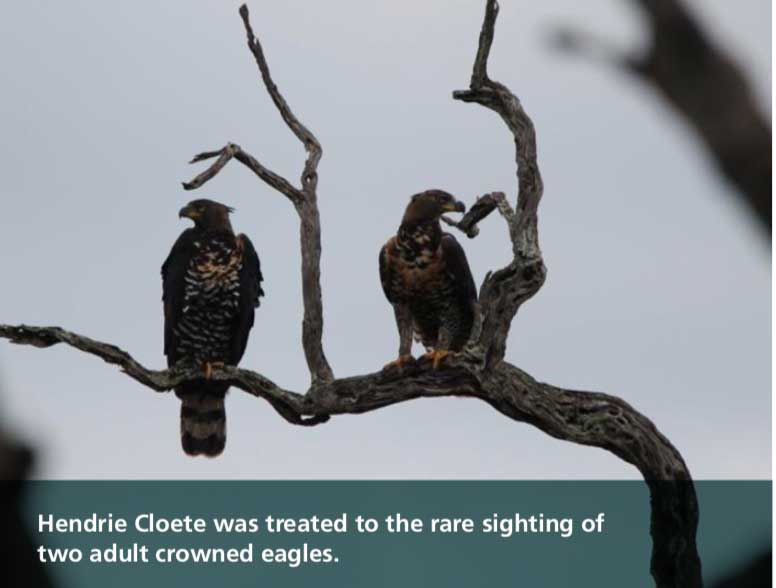 We were thrilled to end 2020 with some interesting bird sightings on the reserve. Noka guide, Hendrie Cloete, spotted a pair of crowned eagles near the Palala Bridge. These denizens of the escarpment forests of South Africa are rarely seen in the Waterberg. Local sightings are usually of dispersing immature birds. So it was particularly special that Hendrie saw two adult birds, more than likely a breeding pair. Could this possibly be a sign of a natural expansion in range for this species? We sincerely hope so!

On Christmas day, a western osprey was seen during an afternoon boat cruise on Kubu Dam. Ospreys are summer visitors to South Africa from the Palearctic regions of the northern hemisphere. They are, however, generally uncommon and have been rarely seen on Lapalala. 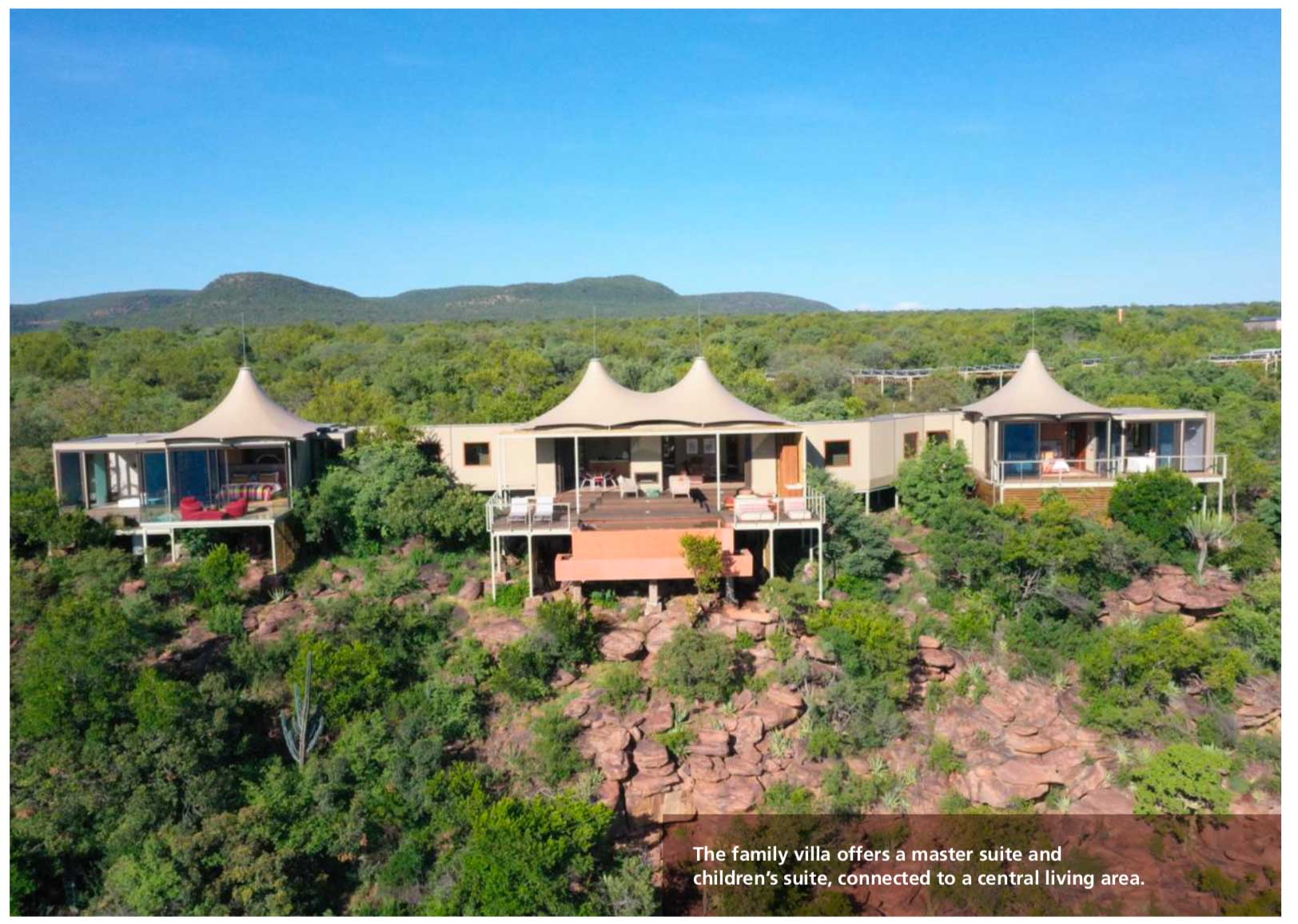 Lepogo Lodges’ Noka Camp has unveiled its new family villa that accommodates up to five people in wilderness luxury.

The family villa is designed around a central living area and kitchen, complete with outdoor decks and a private infinity pool. Walkways connect the wings of the villa that house the master suite and children’s suite, each with its own bathroom. Relax on the deck or in the pool while enjoying unrivalled views of the valley and wildlife below. The family villa comes with its own dedicated team, so guests can choose to dine at the main lodge or in the comfort of the villa.