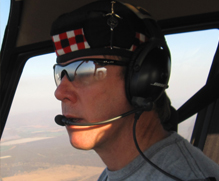 Peter Anderson is the principal of the business and has extensive knowledge, understanding and over 25 years of experience in the wildlife property and conservation tourism industry within southern Africa. Anderson Wildlife Properties are specialists in big 5 protected areas within the region.

Peter spent some informative years growing up in the Timbavati Game Reserve and started his career in conservation after completing a Londolozi guiding course in the  Sabi Sands Game Reserve and guiding safaris for Londolozi. He co-founded the Livingstones Group with David Dunkley in 1986 after which he launched the conservation land company, Anderson Wildlife Properties, in 1993,

He is also a helicopter pilot and photographer.

The list of projects that Peter and AWP have launched and been involved in is extensive and includes:

Peter also is a director of Livingstones Supply Company, Livingstones Garden and Home, Livingstones Lifestyle Centre as well as being a trustee of the SATIB Trust which is a non-profit organization headed by the founder of SATIB, Brian Courtenay. The Trust raises funding for conservation, environmental and community projects in Africa.